As evidence for the maxim that one person can indeed make a difference, consider that, all by his lonesome, arts enthusiast Louis Corrigan gave more money to local arts groups last year than the entire Atlanta Office of Cultural Affairs. Corrigan, a successful investment firm research analyst, is the majority funder of Flux Projects, which sponsors creative installations and performances around the city, and he provides about 40 percent of the backing for professional dance troupe gloATL. But he’s not simply a modern Medici seeking a tax write-off; in keeping with his financial background, Corrigan leverages his assets so the grassroots community gets the biggest bang from his bucks. Through his nonprofit foundation, Possible Futures, he targets grants to enable arts journalism websites artsatl.com and burnaway.org to cover and promote local goings-on. Through Flux and his support for gloATL, Corrigan underwrites public arts projects in such highly visible venues as Freedom Park and Centennial Olympic Park, with the aim of reaching audiences that might not otherwise seek out experimental visual art, photography, or dance.

Although he’s directly involved in ArtsATL’s finances as a board president, Corrigan typically offers strategic matches to additional organizations, spurring them to develop other funding sources. He says that support is always intended to give arts groups the breathing room to develop sustainable models for supporting themselves going forward. In launching the annual Castleberry Hill Flux nights—mark your calendar for October 6—showcasing giant projections, large-scale installations, and performances featuring dozens of artists, Corrigan achieved his goal of creating a “galvanizing event.” Atlanta’s cultural life reaps dividends from Corrigan’s canny investments. 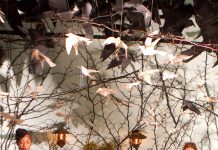