A former Chicago Cubs player and Jason Heyward’s longtime batting coach, C.J. Stewart built a training program that drew from Atlanta’s elite prep schools and travel leagues. More than two dozen students in his Diamond Directors program had gone pro. But Stewart felt he owed something to the mentors who’d helped him rise from a childhood in Atlanta public housing to a career in the big leagues. He also realized that by focusing on wealthy private clients, he perpetuated a system that “set poor kids back even further.” So in 2007, after ten years of building Diamond Directors, Stewart and his wife, Kelli, also launched L.E.A.D. to serve at-risk kids in Atlanta Public Schools.

The organization boasts an active board and dozens of volunteers, but its only full-time staffer is Kelli, who serves as its unpaid executive director. “We don’t scout the best and brightest,” she notes. “We go to teachers and ask, ‘Who here is about to lose their way?’ We want those kids who are about to go to alternative school. L.E.A.D. is not about the bats and balls—it’s about change.” Says C.J., “When I was a child, failure was just not accepted. Not graduating from high school? That was crazy. That was shameful. Now 60 percent of African American males don’t graduate from APS. I don’t feel like Atlanta feels burdened by kids failing.” He and Kelli often point out that 80 percent of the men in Georgia’s prison system grew up in three zip codes—30310, 30315, 30318—whose kids are zoned for APS.

Rendell Jackson, APS program manager of middle school athletics, lauds C.J.’s rapport with students. “When he tells them that a future mayor for the City
of Atlanta or a superior court judge is going to come through L.E.A.D., the kids believe him.” 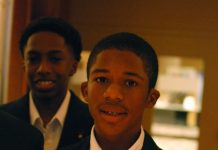 LEAD baseball players weigh in on the Braves move