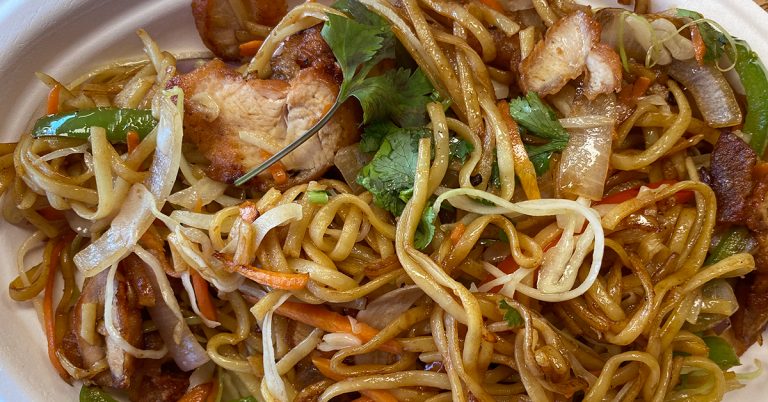 At age 13, Kalsang Lama was already a skilled enough cook to prepare dinner for her family when they returned home from work each night. She grew up in a Tibetan settlement in Mussoorie, a popular hill station in northern India. Her parents were refugees who had fled religious persecution in Tibet, walking across the world’s highest mountains, the Himalayas, carrying just a few belongings with them. In Mussoorie, they worked constantly and spent family time reminiscing about their home country’s food and traditions.

After Lama (who goes by the first name Kelly now) moved to Atlanta in 1995, she found work at Japanese restaurants and had a dream to run her own Tibetan restaurant someday. It took 24 years, but in November she finally opened Himalayan Kitchen, located in a dated strip mall in Smyrna and offering the only true Tibetan food in metro Atlanta. “The location doesn’t matter, as long as you have great food and service,” Lama says. She works the front of the house, offering guests a cup of green tea as soon as they walk in.

Among the first hints of the restaurant’s inspiration are the posters of Tibet’s majestic scenery, traditional endless knot symbols of Tibetan Buddhism, and Tibetan door curtains. The menu is largely based on the family recipes of Lama and chef Sonam Dhong Dhong. Like Lama, Dhong Dhong was born into a Tibetan refugee family in India and started cooking for the household as a child. “I would stand in the kitchen and watch my mom cook,” he says, “until I was allowed to make rice and then later, complete dinners.” He attended a Tibetan boarding school in southern India but didn’t have access to higher education or decent job prospects. When one of his friends sent him an invitation to visit Boston, Dhong Dhong made the difficult decision to leave his family in Dehradun, a city at the Himalayan foothills, to make a better life for himself in the U.S. He worked his way up from a bus boy at an Indian restaurant to the tandoor (clay oven) making bread. He later became a sushi chef in Atlanta.

Dhong Dhong often prepared Indian food for the employees at the Japanese restaurant where he worked. Lama was one of those employees, and Dhong Dhong’s cooking made her nostalgic for the food of her childhood. They knew there were many Tibetan students in Atlanta as a result of an Emory University exchange program and that Emory hosted Buddhist monks. “There is even a monastery,” Dhong Dhong says. “But there was no authentic Tibetan food in metro Atlanta.”

Tibet is bordered by China, Mongolia, Nepal, Bhutan, and India, which means you’ll find similar dishes in each country. Thukpa (also known as gyathuk) is a spicy soup with egg noodles, ground meat, and lots of vegetables; it’s warm and satisfying in Tibet’s cold climate. Another dish, Thenthuk, is essentially the same but uses chunky broken noodles. Chow mein, not unlike what you find at Indo-Chinese restaurants, has long Hakka noodles stir-fried with shredded vegetables, thick soy sauce, black pepper, fresh garlic, and chilis. Sha bhakleb, savory fried beef patties not unlike empanadas, are served in Tibet at potlucks and special occasions.

Dhong Dhong and Lama’s menu features all of that as well as several variations of momo (a steamed dumpling). The half-moon-shaped dumplings traditionally are stuffed only with minced meat, but here you can also get chicken and vegetarian versions, the latter filled with soybeans, celery, chives, cabbage, tofu, green onion, red onion, cilantro, ginger, and garlic. Cooked to order, the soft, warm flour dumplings are served with a dipping sauce made with tomatoes, onions, garlic, and a type of deep-purple Sichuan peppercorn that he imports from India.

If you like Indian curry, try the mild butter curry momo. Or if you’re in the mood for something truly different, Lama created an Americanized version of momo, called “Kelly’s Special,” in which the dumplings are dipped in panko breadcrumbs, deep fried, and served with homemade spicy mayo sauce.

Conversing in English, Hindi, Spanish, and a handful of other languages they picked up, Lama and Dhong Dhong educate their first-time diners about Tibetan cuisine and remember practically every repeat customer by face. Just a few months after opening, they rely on word of mouth and have kept operations intentionally lean.

“We are not jumping into marketing, subscribing to delivery services, or getting greedy for more business,” Lama say. “Only stretch as far as your blanket reaches.” 1651 Roswell Street, Smyrna, 678- 217-4443 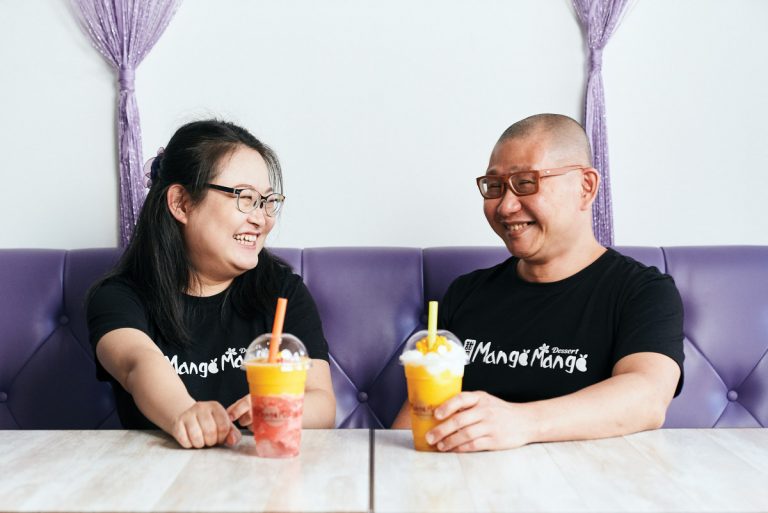 Cindy Cheng and Jet Lee wake up every Wednesday with an urgent mission: track down the very best Ataulfo, Kent, or Tommy Atkins mangoes—100 boxes of each—in town. Their hunt takes them to City Farmers Market in Chamblee, Buford Highway Farmers Market in Doraville, Atlanta Farmers Market in Forest Park, and Your DeKalb Farmers Market in Decatur. “Sometimes, we call ahead to find out how much mango they have and when a fresh batch will arrive,” Lee says. “We have good relationships with the suppliers, so they often save the best mangoes for us.”

Lee and Cheng’s full-time mango mania stems from a warm summer day three years ago in Queens, where they lived before moving to Atlanta. Lee, who immigrated to the U.S. from Singapore, had met Cheng, a Daemen College master’s student from Northern China, at a networking event in 2012. They bonded over their passion for food—particularly dessert. Lee shows me a Facebook post from August 2015: “We had mango pancakes, mango juice sago and pomelo with mango ice cream, and mango juice with glutinous rice ball with mango ice cream!” He was referring to their discovery of a dessert spot in Flushing called Mango Mango.

Though they both worked steady jobs—Cheng as a freelance health coach and Lee as the manager of an online-shopping franchise­—they were looking for a change, perhaps an opportunity that would allow them to express themselves and be their own boss. “We had a dream to own our own store, like a cafe or dessert place,” says Cheng, who has a bachelor’s degree in biochemistry and master’s in global economy. In late 2016, the couple approached the owner of the Chinatown-based company that owned the four New York locations of Mango Mango, which they had grown to love, and asked about opening a franchise in Atlanta on Buford Highway. “Cindy bought an investment property in Duluth without even telling me!” Lee says. He liked the idea of moving to the South, with its promising business opportunities and affordable cost of living.

Since opening Mango Mango on Buford Highway in April 2018, their days revolve around picking, buying, peeling, and cutting mangoes for desserts such as ice creams, juices, jellies, crepes, and pancakes. “To pick a good mango, smell it first,” Lee says. “It should be fragrant, tropical, and sweet. A bad one smells sour or bitter. The color is not important, but make sure to touch. A firm mango will keep for a couple of days, whereas a soft one will have to be used right away. That’s why we can’t preorder mangoes from a supplier. We have to touch and smell it.”

With close to 50 items on Mango Mango’s menu, Cheng and Lee have to work fast in the kitchen, in tight proximity, often for 10 to 12 hours a day. “That’s when the fast-paced New Yorker in me surfaces,” says Lee, who follows detailed pictorial instructions with steps written in Mandarin (he designed the laminated recipe cards himself). He and Cheng also boil red beans, steam rice, feed fresh fruits into an ice-cream maker, and juice strawberries, bananas, kiwis, and pineapples.

They use a Chinese cleaver to carefully dice 60 mangoes per hour into small cubes for toppings and large ones for dessert bowls, reserving odd shapes for juicing. Relying on a special technique they learned during their two-week franchise training, they make full use of every last bit of fruit. Only the skin and seed are thrown away.

They also use durian—called “corpse fruit” for its putrid smell (it tastes, incongruously, like caramel custard). Cheng was not familiar with durian growing up in China, but once Lee introduced it to her, she was hooked. “I love strange foods,” she says, “and durian has a special, creamy flavor.” (Customers do, however, complain of “smelling gas” in the store on the days Cheng and Lee make durian ice cream.)

Cheng relies on frozen durian imported from Thailand and Malaysia for her pastry cream, which she stuffs into pancakes and her meticulous mille-crepe cakes. The cake requires 20 thin crepes to be layered with spoonfuls of mango, durian, and green tea–flavored cream. “It is a repetitive job, and you need to be very careful to maintain the shape of the cake,” she says. “If one layer is not even, the entire cake will collapse, which means I’ll have to start all over.” At first, it took her more than two hours to assemble a single cake. Now, she does it in 45 minutes. Some days, she makes as many as 15 of them.

“When people order a dessert, it’s not just to eat,” Cheng says. “It’s to enjoy the mood and the moment. My customers pay for pretty memories, and that’s what I deliver.”