Home Eldredge ATL Amping up its mission, G-CAPP gets a name change as Jane honors... 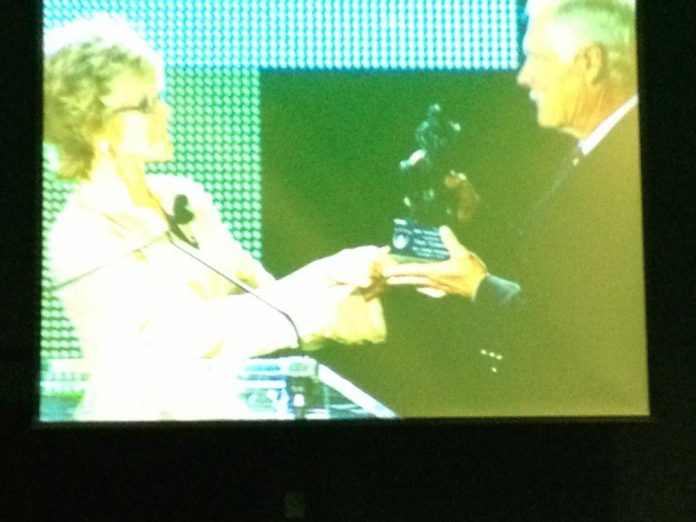 The woman who has cinematically seduced generations of audiences while floating through space nude in “Barbarella” knew precisely what to do Thursday night when bidding ignited over a trip to her Forked Lightning Ranch in New Mexico during the live auction at EmPower Party, the annual benefit for the Jane Fonda founded G-CAPP at the Georgia Aquarium downtown. As three bidders drove up the price on the five-day vacation (including a Santa Fe shopping trip with Fonda) to $27,000, the auctioneer turned to the activist-actress and asked incredulously, “What exactly do you do at this ranch?” Without blinking, Jane Fonda grabbed a microphone and replied, “I’ll sleep with them!” Two minutes later, the bid had skyrocketed to $32,000 and Fonda ended up offering the trip to all three bidders, immediately securing $96,000 for the state-wide non-profit she founded here in 1995. The winning bids received a standing ovation from the evening’s 400 attendees as Fonda bowed deeply and blew kisses to the G-CAPP supporters.

With EmPower Party, Fonda’s 17-year mission to empower girls and young women across Georgia as a way to reduce the state’s then-spiking teen pregnancy rate, saluted its roots Thursday night even as G-CAPP announced plans to expand its mission. Fonda’s most famous ex-husband, CNN founder Ted Turner was the evening’s honoree as the two-time Oscar winner presented Turner with G-CAPP’s first-ever Big Thinker Award. Fonda credits Turner as the catalyst for creating G-CAPP after he invited her along on a romantic trip to the United Nations Conference on Population and Development in Cairo, along with his adult children in 1994 .

“There were hundreds of ideas bubbling up,” Fonda recalled to Atlanta magazine during the evening’s cocktail party. “It was the first U.N. conference where women were at the table, defining the plan of action. It had never happened before. And these were the on-the-ground, front line workers, so they knew. And instead of quotas, which had always been what had come out of the conferences in the past, what these women taught the people in the room, including me was, if you want to reduce population growth and create sustainable development and eliminate poverty, you’ve got to educate girls and young women and you have to empower them with work and jobs and micro loans and knowledge about their rights. Of course, back then, it was revolutionary to hear that. Now, it’s talked about a lot and is one of the millennial goals of the United Nations. Ted works on this globally and I work on this locally with G-CAPP. He’s the big thinker and I’m the grass roots.”

After dinner, Pat Mitchell, Paley Center for Media C.E.O. and the evening’s moderator, Fonda and Turner settled into buttery-hued leather chairs on stage for a public discussion of their work. Fonda recalled the trip to Cairo helped to inspire G-CAPP’s 17-year mantra: “Hope is the best contraceptive.” She said: “I came back from Cairo and realized that I had to take what I learned there and apply it to Georgia. I needed to find out what’s going on in Georgia. I spent a lot of time sneaking off to travel around Georgia. I’ve always been proud of the fact that I know Atlanta better than him! South of CNN Center I know really well! I ended up at Phoebe Putney Hospital in Albany where I was taken to see a 14-year-old girl. She lived in a tar paper shack with no indoor plumbing. She was in labor with her second child. I remember looking down into her face and thinking, ‘Oh my God, I hope she doesn’t see judgment in my eyes.’ I realized right then, she didn’t need me to judge her, she needed me or somebody to put their arms around her and love her and get her in school and get her functioning as a person. But unless that happens when you’re living in poverty, [the thinking is] why not have a child? It’s hope that serves as the motivation. You can give out the condoms but they need to be motivated to use them.”

Mitchell then praised Turner for his philanthropy, saying “Ted, you’ve always put your money where your values are. ” Fonda grinned and added: “Ted has donated tens of millions of dollars toward stopping female genital mutilation. He puts his money where his mouth is.” As the entire audience erupted with laughter, Fonda patted Turner’s hand and added “Your ex-wife can go there!”

On his now-legendary one billion dollar charitable gift to the United Nations, Mitchell credited Turner with creating a charitable template for fellow billionaires Warren Buffett and Bill Gates to follow. Recalled Turner: “I remember Warren Buffett once telling me, ‘I plan to give all my money to family planning when I die.’ I said to him, ‘Warren, you could live for 40 more years. The population could be 12 billion by then. We need money now!”

Mitchell then reminded Turner that he once quipped, “The world has to get rid of testosterone poisoning.” Turner cracked, “I used to drink. I said things then that I’ve since apologized for.” As the audience laughed, Turner added: “Women are still in a catch up situation, but they’re catching up fine. One way to speed things up, and I came up with this idea years ago, would be to outlaw men from running for public office for 100 years. With women running the the world’s governments, we’d see an immediate shift away from the military and toward social programs like education and health care. We’d live in a much better world.”

Fonda then broke some news for G-CAPP supporters: “We’re going to continue our important work on pregnancy prevention but we’re also going to expand to include a focus on healthy relationships and obesity. We’re going to start with obesity because Georgia is third in the nation in adolescent obesity. But what to do about our iconic name, G-CAPP? We didn’t want to lose that.  So we’ve changed G-CAPP to mean Georgia Campaign for Adolescent Power and Potential.” Fonda announced that G-CAPP will roll out its work on adolescent obesity in January.

A walk-on role and set visit to Fonda’s new Aaron Sorkin-created HBO drama series, “The Newsroom” netted G-CAPP $18,000 as the evening’s live auction concluded. Fonda is scheduled to appear in the first episode of season two of the show when it commences filming in November.  We  couldn’t resist asking Fonda if when Sorkin sent her the script to play cable news boss Leona Lansing, she thought,”I’ve got this role in my back packet” after logging a decade living with CNN’s creator. She told us, “Totally, absolutely. I mean, I’m playing Ted Turner with a little Rupert Murdoch thrown in!” 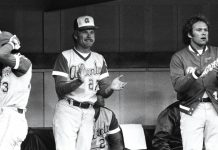 Flashback: That one time Ted Turner coached the Braves