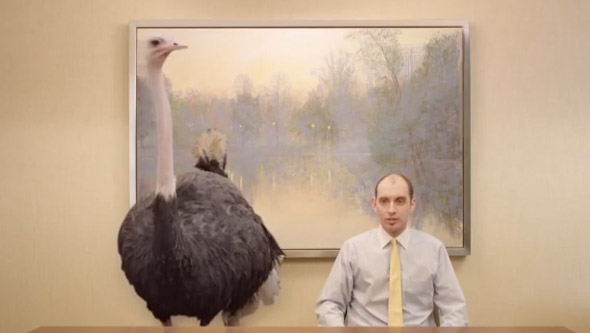 Can you say “dynasty?” For the second straight year, Atlanta will have a rooting interest on Super Bowl Sunday. Not on the field, of course. Rather when people will actually be watching—during the commercials.

In 2013, Decatur director Ben Callner and his pet Moose wrote and shot the ad “Goat 4 Sale,” which bleat…err…beat out the other crowd-sourced corn chip commercials from around the world to win the sixth annual Doritos Crash the Super Bowl contest. The spoils were $25,000 and the exponentially more valuable thirty seconds of airspace during the big game.

This year, Atlanta native Eric Haviv stuck with the wildlife theme, but subbed in a giant flightless bird for the goat and created “Breakroom Ostrich,” one of five finalists from 5,000 entries that are being voted on by the public and by Doritos reps. Two winners will be aired during the game, and their creators will get the chance to work with the production team on the set of Marvel’s new Avengers sequel. The fan favorite will also pocket a cool-ranch $1 million.