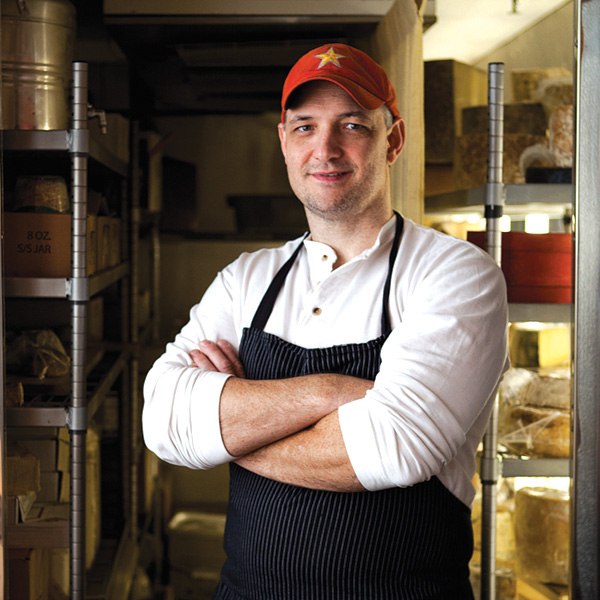 Sometimes I feel like a walking, talking French cliche. Pessimist? Check. Contrarian? Check. Obsessed with cheese? Check! I can’t remember a time when I didn’t eat cheese, and while I would rather die than drink a sip of milk, I have internalized the sentiment of immortal epicurean Brillat-Savarin that “a meal without cheese is like a beautiful woman with only one eye.”
Among the many things I don’t understand about Americans is why they eat cheese before a meal. I am invariably polite about nibbling whatever selection the hosts at dinner parties lay out in front of me, but I know they are ruining my appetite and that I will feel bad about transitioning from the main course to the dessert instead of enjoying a proper cheese course in between.
I often catch myself being arrogant about my country as the source of all cheeses. So, okay, we didn’t invent Parmigiano-
Reggiano, Gouda, or Stilton. But aren’t our Camembert, Roquefort, Pont l’Évêque, Bûcheron, and Brie the most beloved and imitated cheeses in the world? The first years of my life in Atlanta were spent bemoaning the lack of cheeses that didn’t taste like wax, chalk, and/or salt. I gravitated toward Limburgers that reminded me of the stinky washed-rind wonders of my childhood.
Then, nearly thirty years ago, a miracle: The DeKalb Farmers Market, located at the time off North Decatur Road, started holding cheese tastings the likes of which Atlanta had never seen, including many artisanal products from around the globe. The market is still an important resource for cheese enthusiasts, but now other shops offer even more unusual specimens, some of them local, stored under ideal conditions.
One is best served by interacting with a cheesemonger who lops off a precise amount from a big wheel or massive log aged in the proper temperature and humidity. For me, discussions about provenance, types of milk, and styles of affinage (aging) are the rewards of interacting with cheesemongers. I beg for as many little tastes as I can get away with, and I feel no shame about buying by the sliver. Tim Gaddis of Star Provisions and Angel Montero of Alon’s in Morningside are two of my cheese heroes. I recently gave them both the same assignment: “Give me about thirty dollars’ worth of cheese. Pick things you love at the moment.”
From Gaddis, I received Wabash Cannonball, an aged, hand-formed goat cheese from Indiana with an attractive ashy surface; a cave-ripened cow’s-milk cheese called Landaff with a subtle dank flavor from a tiny creamery in New Hampshire; a mellow and rustic raw goat’s-milk tomme from Twig Farm in Vermont; a thin slice of pleasantly musty Cabot clothbound cheddar, also from Vermont; a rich, semisoft Cumberland farmstead tomme from Sequatchie Cove in Tennessee; and colander-shaped, raw sheep’s-milk Berkswell from England with a deep russet-colored rind and a firm, sweetish paste.
Montero, who hails from the same Spanish town as the Zamorano cheese (similar to Manchego but more intense), singled out a scary-looking, phenomenally ripe raw milk Taleggio from the mountains of Italy; the almost meaty, dense sheep’s-milk Abbaye de Belloc made by Benedictine monks in the French Pyrénées; a wonderfully nutty Tomme de Savoie with a smooth Alpine flavor; a lush and creamy Leonora goat cheese from a small producer in the Spanish province of Leon; and raw milk Bayley Hazen Blue from Jasper Hill Farm in Vermont.
Once I got my treasures home, I tried to remember what I’d learned from recently attending the Institut du Fromage held by Atlanta Foods, a major importer and wholesaler of artisanal cheeses with a stellar educational program for retailers. I contemplated the colors. I sniffed the rind and the paste. I tasted flavors ranging from barnyard to woods, grass, and the all-important mold. Whether they were aggressive, floral, feety, lactic, crunchy, or damp, my cheeses connected me to distinctive European and American terroirs—the same way wine does.
When I go to more formal restaurants, I expect to see cheese on the menu. Bacchanalia has an almost unfair advantage because it has its own shop and Tim Gaddis on premises, resulting in the best cheese trolley in town. Restaurant Eugene always has at least twenty cheeses in the house, many of them from the South, and it holds monthly thematic tastings with wine pairings. Woodfire Grill inherited a built-in cheese cooler from its previous owner and has kept the flame alive by pairing cheeses with understated fruit and nut accompaniments. Empire State South lays a spread on a handsome slate board: It facilitates comparisons between a superb Capriole O’Banon goat cheese from South Indiana, which is wrapped in chestnut leaves soaked in bourbon, and an exuberant fromage blanc made at the Udderly Cool Dairy in Roopville, Georgia, from milk supplied by Berry College.
Truly great American cheeses such as stinky washed-rind Grayson in Virginia and Rogue River Blue from Oregon have risen in my personal pantheon. Don’t hold it against me, though, if I still yearn for the young unpasteurized cheeses that remain illegal in the United States. And if you still think Boursin is a true cheese, let’s just avoid discussing the subject altogether.
Vital Statistics
Star Provisions
1198 Howell Mill Road
404-365-0410
starprovisions.com
Alon’s
1394 North Highland Avenue
404-872-6000
4505 Ashford Dunwoody Road
678-397-1781
alons.com
Photograph by Iain Bagwell
Advertisement