Home Uncategorized Automatic for the Diners 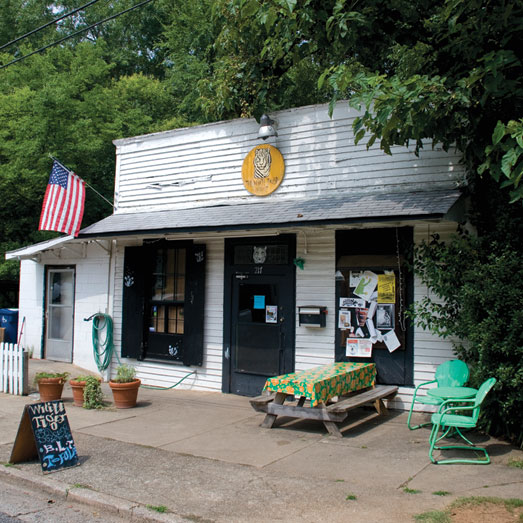 I have cried only once at a culinary event: the 2007 James Beard Foundation Awards, when a towering man in a tuxedo and a ruffled shirt bounded onstage, collected the medal that honored his restaurant as an America’s Classic, and opened his mouth. “I want to thank God, R.E.M., and the University of Georgia,” Dexter Weaver said with the booming voice of a preacher. The crowd went wild. All that love for Athens, Georgia, and Weaver’s place overcame me.
I hardly ever go to Athens without stopping at least once for lunch at Weaver D’s Fine Foods, which supplied the title for R.E.M.’s album Automatic for the People and serves the kind of soul food I would mortgage my own soul for. I order fried chicken, sublime squash casserole, and the best sweet iced tea I know, with a big wedge of caramel cake plunked in front of me on a picnic table. I love hearing the owner, who is a deacon as well as a restaurateur, call out “Automatic!” every time he rings up a customer, the motto that became a source of inspiration for Michael Stipe.
My Athens is a chill, classic college town with great little bars that don’t bother to serve food, funny old drugstores and diners, and at least two dozen restaurants where I like to eat. Almost every place has an outdoor area, the better to see massive football players riding tiny scooters around town and the occasional preoccupied professor hurrying by. (I hate to say it, but I have never gone to Athens on a football weekend. I am too scared of traffic that has people parking illegally on the access ramps to the highway.)
Athens has its own culinary specialty you won’t find anywhere else: mull, a white chowder made with milk, chicken, and crumbled saltines. Finding mull in restaurants used to be difficult. One had to catch it as a special on the right day at the Georgia Center, UGA’s conference center, or happen upon it at some church function. Thanks to Butt Hutt Bar-B-Q, a relatively new and deliciously traditional barbecue restaurant popular with the football team, one can now eat a superb version of mull—peppery and not too grainy—every day of the week.
The town has become a culinary heavyweight, in large part due to Hugh Acheson, a multiple James Beard nominee on his way to winning a Best Chef Southeast award. He rules the roost with two restaurants—the diverse and relaxed Five & Ten, across the street from a dime store, and the National, serving Mediterranean dishes (and a homey brunch) next to Athens’s best movie theater—and a wine and cheese shop called Gosford Wine that are as exciting and fresh as anything you can find in Georgia. By the time you read this, Acheson’s Empire State South, an upscale take on the meat-and-three, will have brought a taste of Athens to Midtown Atlanta.
Beyond Acheson’s authoritative impact, a new generation of quirky restaurants and authentic-minded ethnic spots coexists with the beloved old places. Last Resort Grill and the Grit, a vegetarian favorite, have made heroic contributions toward establishing healthier dining habits in the community. (Last Resort’s newly added Sunday brunch will delight fans of veggie omelets and breakfast enchiladas.) Much newer on the same beat, White Tiger Gourmet, located in the Boulevard historic area, occupies a wonderful hundred-year-old store with peeling white clapboard and a room full of mismatched furniture. Young waitresses in granny aprons shuttle between the interior and six big picnic tables set among trees in a grassy lot. The restaurant is gaining fame for its big, meaty burgers with organic greens, and its sturdy homemade chocolate bark.
Normaltown—a neighborhood named after the old Normal School, which became the Navy Supply Corps School—boasts two soon-to-be institutions. Ike & Jane—a bakery-cafe with the friendly vibe and the kind of kitschy, midcentury graphics one associates more with Brooklyn than Athens—offers handmade doughnuts, apple fritters, and cupcakes, as well as breakfast biscuits and sandwiches on its own ciabatta bread. The starker Normal Bar is deadly serious about its freshly crafted cocktails and embraces blue-collar chic with weird combinations such as Bud Light and butterscotch schnapps.
Totonno’s Famous Meatballs doesn’t look like the kind of place that worries much about fashion, yet its interpretation of this singular dish falls right in with a hot national trend. The choices are beef, pork, turkey, and lamb, all freshly ground and hormone- and steroid-free. Frequently served with an intense marinara, the little orbs are available naked, in a sub, on spaghetti, or atop a salad.
I don’t know whether to be pleased or jealous that Athens beat Atlanta to another national trend by deploying a glorious food cart outside of Farm 255. I am a fan of this handsome, harvest-driven restaurant (the owners also manage Full Moon Farms and serve burgers made with sustainably raised meats at Farm Burger in Decatur), but given a chance, I’d rather sit on its patio and eat a $6 lunch from its Farm Cart. On the weekend, the vehicle frequently rolls into Atlanta-area farmers markets to demonstrate the virtues of street food, serving smashing seasonal soups and a signature Spanish tortilla with farm vegetables.
Geographically speaking, Athens is almost part of the greater Atlanta area. Its culture, however, is nothing like ours. For the most current information on Athens’s restaurant and bar scene, pick up a copy of the Flagpole, an alternative paper whose reviewer, my daughter Hillary Brown, thinks like me!
Photograph by Caroline Kilgore
Advertisement

Athens import Maepole is ready to open in Summerhill

Beyond Football: Choose an ATHventure in Athens