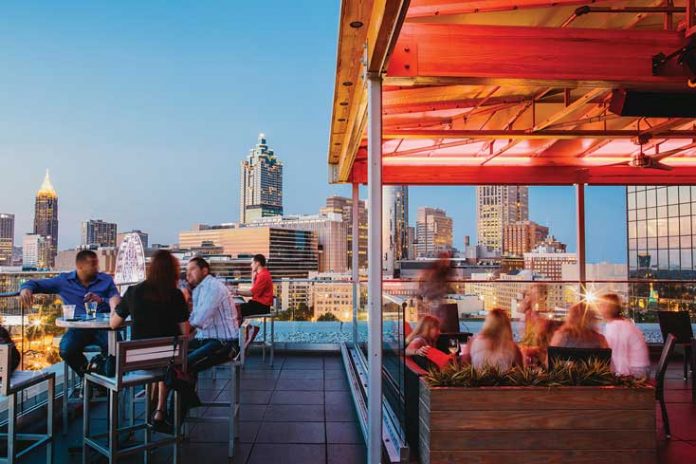 “Location, location, location”—preferably with street visibility and plenty of parking—is one of the tenets of restaurant success. Ideally, though, a city should also have secret haunts where urbanites can hide from the maddening congestion and cruel glare. Because so much of my life is spent jostling for tables with people eager to see and be seen, I cherish places where I can escape from too much sensory stimulation. Give me an alluringly dim basement, or a soaring rooftop with the night air to fill my lungs.

Other than some glittery glimpses caught from the expressway, few public settings offer spectacular views of Atlanta. You might as well disappear underground—although not to Underground Atlanta, that subterranean reminder of failed entrepreneurship. Restaurants and bars underneath the city seem to better thrive than those far above it. For example, the reputation of La Grotta, Buckhead’s Italian class act, has been enhanced rather than harmed by its cellar-level dining room in a mid-fifties condo building: Thirty-five years in, businesspeople and celebrating couples still savor the cloistered privacy and conviviality. Meanwhile, a dinosaur like Nikolai’s Roof in the Hilton Atlanta putts along without much attention (though I do love its lower-level counterpart, Trader Vic’s).

In general, though, Atlanta’s most memorable skyline-height and belowground hangouts have more to do with good cheer than exceptional gastronomy. They set a mood, spark conversation, and serve potent drinks.