Home Philanthropy Bodies as a Work of Art benefit soars to sexy new heights...
It’s the city’s one charitable fundraiser female attendees never have to drag their male counterparts to. And thanks to chairman Carey Carter, Monday night’s second annual Bodies as a Work of Art benefit at Tongue & Groove in Buckhead amped up the exposure, the donations and the sexiness. The exhibition of live body art inspired by the edgy artistic sensibilities of the late Atlanta artist Paul Chelko benefits the Chelko Foundation, a non-profit dedicated to empowering women through art and education. This year, the evening also benefited Jaden’s Ladder, a charity dedicated to helping victims of domestic violence.
Artists and models convened at the nightclub starting at 11:30 a.m. Monday where the painstaking body paint application process began. By 7:30 p.m., in front of a packed nightclub, the results were ready for the catwalk.
Carey Carter, the longtime Carter-Barnes Hair Artisans co-owner and veteran charitable fundraiser, served as a judge at last year’s inaugural event and says he was awed at the evening’s potential. “I was blown away by the artistry and wanted to help take this to the next level,” Carter told us just before showtime. “One of the things I love about this event is how cutting edge it is. It’s a tricky thing to sell to people, especially in the South. But I was happy to take the gamble. Not only does this have the potential to become a premier fundraiser in this city, but across the country as well.”
Dave FM’s Mara Davis hosted the evening and acclaimed photographer Harriet Leibowitz, radio and TV personality Tom Sullivan, Metrofresh owner Mitchell Anderson, former Atlanta Falcon (and current minority owner) Warrick Dunn and yours truly served as judges for the evening. Across the way from the judge’s table, R&B crooner Keith Sweat and friends took in the festivities from the VIP section as did curator sponsors Drs. Nancy and Jeff Gallups. The event attracted an impressive cross-section of traditional fundraiser aficionados, along with art lovers, media and PR professionals and a much-coveted younger demographic who could easily afford the $75 ticket. More than a few longtime Carter-Barnes customers were treated to their first “Bodies as a Work of Art” benefit. Few were scandalized and most had their camera phones trained on the stage all night in order to snap a few sexy souvenirs (as one Carter-Barnes customer whispered to us: “I love this! Besides, I’ve been going to Carey Carter for 22 years. God knows what might happen to my hair if I ever said no to that man!”).
Chelko Foundation board member and event founder Randi Layne was thrilled with the turnout. Leaning over to give us a hug, she whispered, “This is so far beyond any expectation I had. We’re just amazed by all this support.” Board member Ken Goldwasser announced funds raised would be used to create a Chelko arts scholarship for women. Jaden’s Ladder founder Oneta Bobbett flew in for the event. “I’ve been on the verge of tears all night!” Bobbett confided to us. “This is one of the most amazing fundraisers I’ve ever been to. It’s absolutely innovative.”
The evening had but a single snag, namely, us. We were so impressed with the artistry, we graded on a scale of 1 to 10 and had to recalculate our efforts on the allotted 1 to 5 scale (we’re eternally grateful to Chelko Foundation board member Adam Malm who somehow resisted the urge to plunge a clipboard deep inside our cranium while re-crunching the numbers). Blessedly, “American Idol” alum and Atlanta resident Anoop Desai kept the crowd entertained with a pair of songs in the interim.
The evening’s winner was artist and Highland Bakery cake designer Karen Portaleo, who successfully expanded her canvas from frosting to the human form for the evening (we wish we could run the photo of Portaleo’s beautiful but very bare breasted work…). Wearing slightly more clothing was returning model Adam Gates. He was glammed up as a sexy spaceman, courtesy of artist and Jeffrey Atlanta general manager Don Purcell.  Gates told us he knew the event was a winner even as he was departing the inaugural “Bodies” last summer.
“As I was driving home, I was getting calls on my phone, asking if I would participate again,” Gates recalled while posing for pictures with a suggestive plastic ray gun. “It’s a great event and everyone does a killer job. Plus, this year I got to carry a penis gun around all evening. What’s not to like?!” 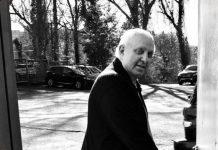 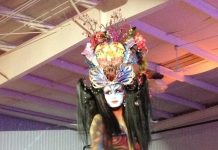 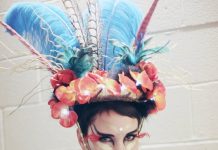 Sexy, stylish Bodies as a Work of Art set to strike a pose Sept. 29