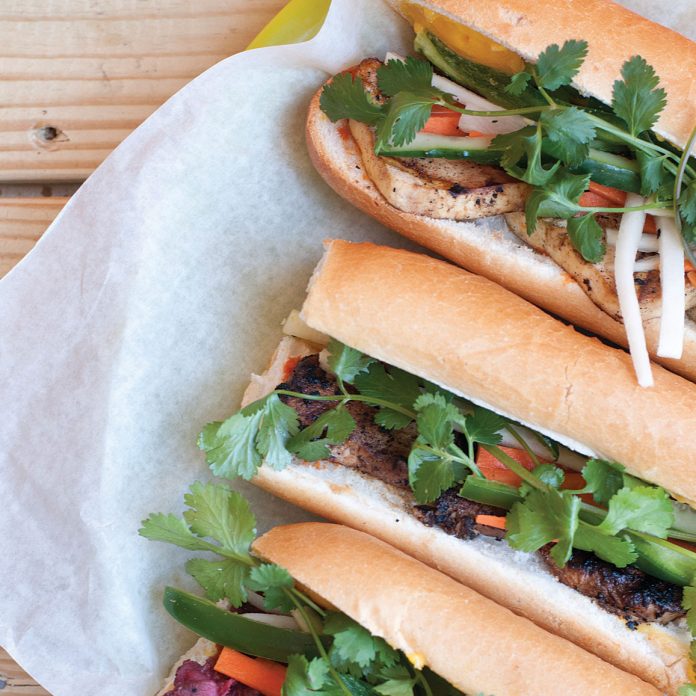 Quynh Trinh goes by “Q” and calls everyone “honey” or “babe.” A former brand manager for Singaporean Tiger Beer who grew up in Chicago, she took over a sliver of an ice cream parlor in East Atlanta Village last year to open We Suki Suki, a spunky sandwich and tea shop. If her kitchen equipment (a Foreman grill and a toaster oven) at first gave me pause, any doubts about the seriousness of her intentions vanished after one bite of her traditional banh mi subs. The crisp, airy Vietnamese-style baguettes are showered with marinated meats or tofu and garnished with slivers of carrot and daikon, sprigs of cilantro, and slices of jalapeño. They’re as skillfully composed as any banh mi you’d find on Buford Highway—and at $5 apiece, they’re nearly as inexpensive.

In the fourteen months since Q opened her storefront, which is barely bigger than a food truck, the hours (11:30 a.m. to 9 p.m. daily) have become more consistent. Every surface behind and in front of a small kitchen area is covered with artwork, family photographs, games, and mismatched furniture. Most of the business is takeout, but there are four seats to soak up the eccentric atmosphere. Q has her routine down pat, heating up several baguettes at a time and filling them with grilled lemongrass chicken or creamy tofu made locally in Norcross, char sui (sweet Chinese pork barbecue), or liver pâté and cold cuts. Every sandwich is cut in half, wrapped in butcher paper, and kept together by a rubber band in which Q also tucks a piece of Vietnamese hard candy.

Chatting all the while, Q turns out chicory-laced Vietnamese coffee with condensed milk or Taiwanese milky tea with tapioca pearls. She may also make Malaysian-style teh talek, black milky tea poured from a dramatic height. Four or five times a week, she serves beef pho simmered at a slow bubble for twenty-four hours and then meticulously defatted. Q won’t let you do takeout for pho, so you eat it burning hot with handfuls of herbs and sprouts. The combination of fresh broth, just-cooked rice noodles, and thinly sliced, still-pink top sirloin will indeed make you say “suki suki,” a Japanese expression (and popular slang in many Asian countries) that basically means, “I’m liking this a whole lot.” 479 Flat Shoals Avenue, 404-901-6992, wesukisukieav.com

Photograph by Caroline C. Kilgore. This article originally appeared in our April 2013 issue.