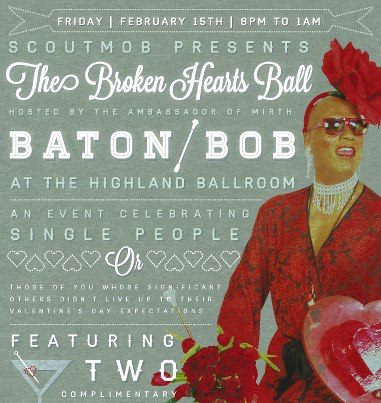 So, it’s February first. In less than two weeks, the non-stop array of floral arrangements will begin assaulting your workplace. And ever since your ex pulled a Jimmy Hoffa last summer, taking your three adorable chocolate labs, Bella, Edward and Jacob with him/her, you’ve been dreading Valentine’s Day.

This year, you can make a preemptive strike at Cupid, however, thanks to Atlanta’s own Ambassador of Mirth Baton Bob. Yes, the city’s most charismatic street performer since Bicycle Shorts Guy is hosting The Broken Hearts Ball at the Highland Ballroom on February 15. Sponsored by  Scout Mob, the smart phone app bargain purveyors, the evening promises: “Roses are red, Violets are blue. We’ll be boozing it up with Baton Bob this Valentine’s Day, and so should you.”

In addition to handmade boutonnieres created by Baton Bob himself for the first 100 guests, the evening will also feature a burlesque performance by Sadie Hawkins, red velvet cake pops by Atlanta pastry chef and Food Network sensation Joshua John, local craft beer from Frozen Pints, and a giveaway of two upgraded rooms upstairs at the Highland Inn, just in case your romantic fortunes change after a few shots of Jagermeister.

While the mirthful one has yet to finalize an ensemble for the evening, Baton Bob took to his Facebook page Thursday to exclaim of the event: “Get your dancing shoes in order because the Broken Hearts Ball is going to be off the chain!”

And hey, since it’s right down the street from Bicycle Shorts Guy’s legendary perch on Ponce de Leon Ave., maybe he’ll treat attendees to a special cameo appearance as well. . .

The Broken Hearts Ball at the Highland Ballroom, Friday, February 15, 8 p.m. to 1 a.m. Tickets start ar $25. For details, open your Scoutmob app or go to the event page. 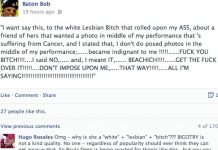 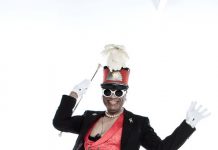