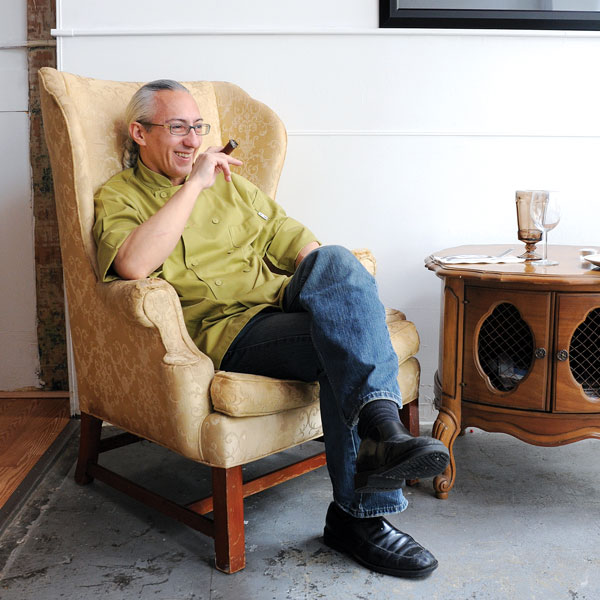 Among his peers, Paul Luna sticks out like an extreme skateboarder at a golf convention. As tiny and intense in his forties as he was two decades ago when he first landed in Atlanta, he has yet to cut the waist-long hair (now gray) that he braids tightly like a Na’vi in Avatar. His deep, dominant voice has mellowed, and he no longer relies exclusively on curse words for emphasis. Mostly he reserves his wrath for city bureaucrats who made liquor license and parking issues so difficult for Lunacy Black Market, the restaurant he opened in late 2009 on a blighted corner of Downtown.
During his seven years away, he worked consulting gigs in Washington, D.C., and cooked in Hawaii. Most recently, he was writing a bilingual children’s book while living in Southern California. Why did Luna turn his back on us? “There was no life here, no passion,” he told me, swirling red wine in a glass while we both stood in Lunacy’s kitchen. Why come back, then? “I thought I could do something about it,” he said. The culinary world has plenty of enfants terribles and agents provocateurs. Luna strikes me as an entirely different creature—a moon child with a need for seemingly impossible goals. One example: his halfway serious plans to run for mayor, something he’s been threatening to do for years.
Born one of thirteen children to middle-class parents in the Dominican Republic, he had trouble adjusting to school and wrestled with learning English. He first came to Atlanta to open Bice, a Milan-based, upscale Italian chain, in the early 1990s. When Luna created Luna Si near Piedmont Hospital in 1993, he thumbed his nose at classic fine dining with a makeshift decor and prices that weren’t just for the Buckhead elite. Eclipse di Luna and Loca Luna, both mischievous tapas bars, went even further into the same trope. Unfortunately, the chef’s increasingly erratic behavior—mooning people, dancing on tables—began to exhaust customers’ patience, and he left town. (Luna Si is long closed, but Eclipse di Luna and Loca Luna remain open under different ownerships.) Suddenly, he returned in 2009, having pedaled a bicycle from San Jose to Atlanta simply for the physical and mental challenge—or, as he inscrutably put it, to “raise awareness about fearlessness.”
As a way to help revitalize Lunacy’s neighborhood, Luna cooks great tapas at surreally low prices. For all his eccentricities, he has always struck me as one of the sanest and best cooks I know. The menu at Lunacy—which Luna runs with his “old lady,” life partner Cynthia Thomet—is handwritten on squares recycled from wine boxes. Balsamic mint short ribs, bicolored cabbage salad with Gorgonzola and toasted walnuts, sauteed rice cakes, braised chicken leg, soft mozzarella with slices of tomato, and garlicky shrimp all average between $3.10 and $4.15 each. The Sunday-only, all-you-can-eat “pasta and risotto a-go-go” is a throwback to Luna’s career in distinguished Italian restaurants, yet he only charges $9.95 per person.
If this is madness, his is the right kind of madness for a city whose food scene could use a little more moxie and a little less conformism. 231 Mitchell Street, 404-736-6164, lunacyblackmarket.com
Photograph by Caroline Kilgore
Advertisement