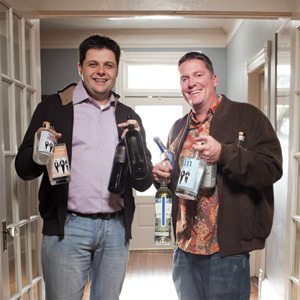 In wine retailing, knowledgeable buyers are forever looking for the sweet spot—a special bottle costing between $11 and $17 that displays impressive character. Buyers collect even more cool points if they are early adopters of relatively obscure grapes from countries not yet widely known for producing wine.
If Zlatko Bogoevski and Hudson Rouse, the real-life buddies behind Two Friends Import Company, can convince more restaurants, stores, and distributors to carry their brands, a broad swath of Atlanta may soon develop a taste for powerful, affordable Macedonian wines made with no added sugars, yeasts, or sulfites during fermentation.
Vranec, the indigenous grape of Macedonia, translates into a wine that is as dark and muscular as a Petite Syrah. It is grown without irrigation in the rocky soil of the country, which sits to the north of Greece and became independent after the implosion of the former Yugoslavia. Rouse, whose twin brother is the chef to the Atlanta Hawks, and Bogoevski, the son of a commercial Macedonian grape grower, are avid gardeners with serious culinary chops. They see similarities between Southern and Macedonian cuisines—“a love of vegetables, especially hot peppers,” says Bogoevski.
“We are little guys; we like to deal with little guys,” says Rouse about their business model. Look for their Bovin and Popova Kula labels (which include not only Vranec but also Merlot, Cabernet Sauvignon, and Chardonnay grown in Macedonia) at Top Flr, the Porter Beer Bar, Midway Pub, the Mercantile, Candler Park Market, and DeKalb Farmers Market.
In addition to versatile Macedonian wines, the two entrepreneurs bring in craft spirits from Kentucky (Corsair Artisan gin, red absinthe, and potent Wry Moon unaged whiskey) and California (super-premium Haamonii Smooth shochu), used for cocktails at Cakes & Ale, Bocado, Holeman and Finch Public House, and H. Harper Station. Next on the horizon? Rouse and Bogoevski will attempt to market wines under their own Two Friends label. In the meantime, look for their existing imports on the shelves of newly opened H&F Bottle Shop in the Peachtree Battle shopping center. twofriendsimports.com
Photograph by Kaylinn Gilstrap
Advertisement