DOMA’s done. So what happens next?

Well, according to Greg Nevins, supervising senior staff attorney of the Southern Regional Office of Lambda Legal, an organization dedicated to expanding civil rights for the LGTB community, the only real, immediate effect will be felt by those who’ve already been married in states that allow gay marriage.

Married gay couples living in Georgia and elsewhere should now receive full federal benefits as a result of today’s 5-4 Supreme Court ruling on the 1996 Defense of Marriage Act, Nevins says. But they’ll likely have to wait a few years to enjoy state benefits.

Nevins noted with some irony that Justice Antonin Scalia, who dissented from the majority, was correct in pointing out that, although today’s decision doesn’t sweep out laws like Georgia’s, but it lays the groundwork for them to be overturned on the logic that the same arguments that struck down DOMA can be used against state prohibitions against gay marriage.

Generally speaking, there are two ways that Georgia’s same-sex-marriage law can be legally overturned, Nevins says. The easiest would be for a federal lawsuit to successfully challenge the ability of states to narrowly define marriage; such a move would invalidate all state laws nixing gay marriage.

More time-consuming and haphazard would be individual lawsuits challenging such laws on a state-by-state basis.

“Structurally, Georgia’s is a difficult law to get at” because, as in California, it was adopted by statewide referendum, Nevins says.

Lambda Legal and other gay advocacy groups will take a while to consider their options. Already, some legal pundits are predicting that legal barriers to gay marriage will be swept away across the country within five years.

“I don’t know how they came up with their timeline, but I hope they’re right,” Nevins says. 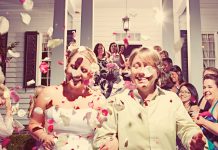 Tweets of the Day: Kasim Reed, the AJC, and Gay Marriage Edition