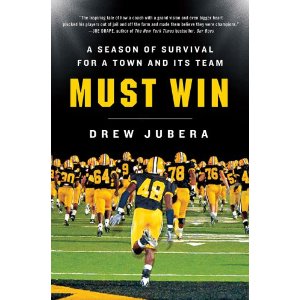 In a matter of minutes Wednesday night, thanks to shares from his old ink-stained newspapering pals, Facebook became awash with the cover of former AJC national correspondent Drew Jubera’s upcoming book “Must Win: A Season of Survival for a Town and its Team.” And mind you, this is just for the pre-order announcement. The tome, via St. Martin’s Press doesn’t technically hit stores and Kindles until September 4.

Back in 2010, Jubera spent a year making an indentation in the stands at the 11,000-seat Death Valley stadium while chronicling the Valdosta High School Wildcats football program as Title Town USA faced down economic hard times and acclimated to a new coach. In a post to Facebook friends Wednesday, Jubera wrote: “The heaviest lifting is finally finished. Anxious to return to the world and see y’all.”

Esquire magazine writer at large and former Atlanta magazine scribe Tom Junod is among those contributing a blurb for the book: “Drew Jubera’s ‘Must Win’ is a must-read that not only makes good on the promise of its title, but makes its title come blazingly alive. You start reading it because you want to know how a team from a small town in South Georgia became the greatest and most storied team in the history of American high school football. But Jubera is a writer who can go deep, and the story he’s telling is the story of how even winners can become underdogs in post-crash America, and how even underdogs can find a way to beat the odds and win again.”

Harry Wayne Casey aka K.C. of K.C. and the Sunshine Band enjoying cocktails on the rooftop patio at Whiskey Blue at the W hotel in Buckhead. The disco survivor was in town for a show at Chastain. Songstress Colbie Caillet, who was supposed to be performing in St. Augustine, was riding out Tropical Storm Beryl celebrating her birthday with 15 friends at Whiskey Blue as well.

Former AJC assistant managing editor and New York Times national correspondent Dudley Clendinen died Wednesday in Baltimore. He was 67. Diagnosed in 2010 with ALS, the bowtie-accented editor informed the public of his condition via a moving NYT op/ed piece, “The Short Good Life” in 2011. Wrote Clendinen at the time: “I don’t worry about fatty foods anymore. I don’t worry about having enough money to grow old. I’m not going to grow old. I’m having a wonderful time.” 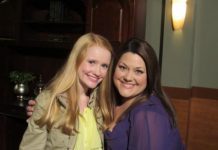