Home Eldredge ATL Fonda introduces “Jane” to Atlanta, leads empowerment discussion at G-CAPP benefit
Most famous people don’t dig around in their personal archives for the most humiliating moment of their career and then book the Rich Auditorium at the Woodruff Arts Center and invite 300 people to view the cinematic carnage.
Then again, most people aren’t Jane Fonda.
On Sunday night, the Georgia Campaign for Adolescent Pregnancy Prevention founder and former Atlantan used the obscure 1962 documentary “Jane” by filmmaker D.A. Pennebaker as an educational opportunity to underscore G-CAPP’s primary mission: The empowerment of young women. In the film, a 25-year-old Fonda and the Broadway cast of the upcoming play “The Fun Couple” are chronicled as they prepare for the production’s opening night.
Throughout, the young actress expresses guilt for being the daughter of Henry Fonda even as she’s being verbally abused by the play’s director Andreas Voutsinas (Fonda was also dating her director, perhaps foreshadowing her subsequent relationship with French film director Roger Vadim). The camera also lingers at length while Fonda is in a costume fitting for the play’s bikini scene. The play opened and closed over a period of two days.
Introducing the film, Fonda told the packed house she revisited “Jane” in 2004 as she was writing her memoir “My Life So Far” in Atlanta. “I got drunk, pulled the shades, watched it and got sick,” she recalled. “It’s a very painful thing for me to watch. I saw a woman who wasn’t inhabiting her own body. A woman without a voice.'”
After the film, Fonda was joined onstage by “Precious” actor and Oscar nominee Gabourey Sidibe and Alliance Theatre Young Actors Amber Iman and Kylie Brown in a discussion moderated by Alliance Theatre artistic director Susan V. Booth to discuss the lessons of triumph over adversity, a core value of the G-CAPP program.
“Back then, we were told to be ‘good girls,'” Fonda reflected. Recalling a botched audition in front of acclaimed director Elia Kazan for 1961’s “Splendor in the Grass,” a role that eventually would go to Natalie Wood, Fonda said Kazan asked her “Are you ambitious?” She said no.
“I knew then and there I had given the wrong answer,” she said. “But I was too afraid to say ‘yes.’ I was too afraid to even think ‘yes!'”
Throughout the discussion, Fonda alternately beamed at Sidibe and blinked back tears as the self-confident, hilarious actress, who now appears on Showtime’s critically acclaimed “The Big C,” related stories about being plus-sized in a size zero Hollywood.
“Everyone thought ‘Precious’ would be it for me as an actress,” she related. “By all accounts, I shouldn’t be an actress. But I defy that. I work constantly. I prove people wrong and I love that.”
Added Fonda: “At G-CAPP, we help young people get their voice back. It may take a long time. For me it took 62 years. But it can happen. You can get your voice back.”
On Wednesday night, Fonda and Sidibe will take the film’s message to New York City’s Paley Center for Media as a fundraiser for the Women’s Media Center. Fonda’s friend and former PBS chief Pat Mitchell will moderate the discussion. Mitchell was among those in the crowd Sunday night along with Atlanta author Pearl Cleage, who sat slack jawed through the screening a row behind us.
At the post-screening reception, we asked Fonda about the origins of the “Jane” screening. “Well, we needed to find a fundraiser,” Fonda allowed with a laugh. “I’m 73 now and when I had just turned 71, I was about to do the play ’33 Variations’ on Broadway. I was to have lunch with a powerful, not-to-be-named critic whose critiques are put on television. Clearly, I was to go to lunch and make a good impression. One of the first things out of his mouth was, ‘Well, I’ve seen ‘Jane,’ like it’s going to kill me. Which it might have at a certain time. And I said to him, ‘Aren’t I lucky to have concrete evidence of how far I’ve come?!'” He was stunned. It clearly had never occurred to him to look at it that way. Pearl Cleage just told me that, for her, it was a slave narrative. I did not know how to say ‘no.’ Not to Pennebaker, not to the director. Tonight was about finding that voice and amplifying it so others can hear it.”
Aside from a trip to New York, Fonda is staying in Atlanta through the Easter holiday to spend time with her daughter Vanessa Vadim and her grandchildren.
“I have a full Easter bunny suit and each year I dress up,” Fonda previewed. “I put on a clown face and I glue broom straws to my face and I’m the Easter bunny. We hide eggs. I just talked to [G-CAPP host committee member and friend] Ginny Brewer about it and she told me they do [Brewer’s husband is MindSpring founder Charles Brewer] a capitalist Easter egg hunt. She told me they hide money inside some of the eggs. So I’m going to try that this year.”
Fonda also gave us scoop on what could be G-CAPP’s next big fundraiser, a star-studded screening of Fonda’s next comedy, “Peace, Love & Misunderstanding” this fall. The film, directed by Bruce Beresford (“Driving Miss Daisy”), is about a conservative lawyer who takes her two teenage grandchildren to meet their estranged hippie grandmother in Woodstock, NY. The film also stars Jeffrey Dean Morgan, Chace Crawford, Catherine Keener, Rosanna Arquette and Kyle MacLachlan. We’ll give you exactly one guess who plays the free lovin’ peace sign flashing grandma. . .
Advertisement 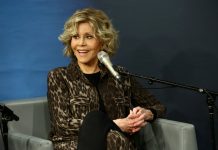 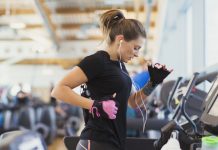 How does music impact your workout? 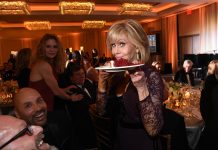