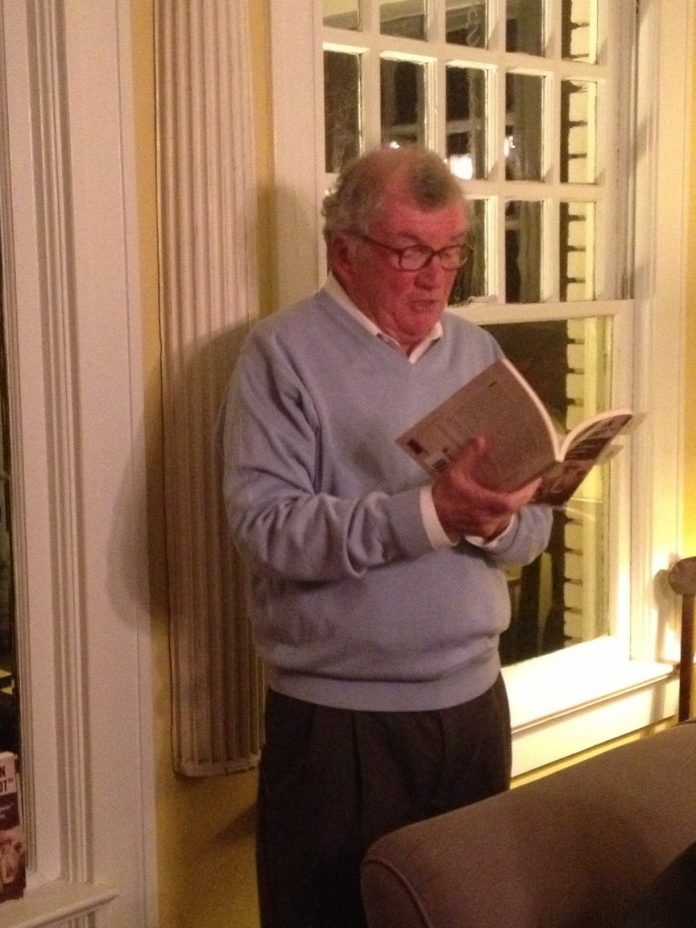 “Welcome to the finest group of grizzled WGST has-beens ever assembled!” cracked former WGST program director Nancy Zintak as she greeted guests into her Midtown home this week to celebrate old friend Tom Hughes‘ new book. Since the 30-year WGST morning man retired from dawn patrol duty in 2006, he’s been keeping busy at the Atlanta History Center, scrolling through old newspaper microfilm looking for a suitable story to turn into a book.
With the 100-year-old Peachtree Street shooting of young businessman Gene Grace (dubbed “an Adonis from a Georgia town”) inside a locked bedroom allegedly at the hands of his glamorous, wealthy but apparently agitated Yankee wife, Daisy Grace, Hughes found one.

Hence, the book party Wednesday night for Hughes’ brand-new tome, “Rich Georgian Strangely Shot: Eugene Grace, Daisy of the Leopard Spots and the Great Atlanta Shooting of 1912” (McFarland, $45). Fueled by the yellow journalism-hued headlines generated by the Atlanta newspaper The Georgian that had just been bought by publisher William Randolph Hearst, the salacious story even managed to knock the sinking of the Titanic off Atlanta front pages intermittently.

The case came at a curious time in the history of Atlanta, wedged between the The Atlanta Race Riot of 1906 and 1913 trial of Leo Frank. Newspaper stories of Atlantans acting less than admirably were abundant. The Gene and Daisy Grace shooting was compounded by an odd Georgia law at the time that prohibited Gene from testifying against his wife in court. The Atlanta Georgian, the Atlanta Constitution and the Atlanta Journal all had reporters there in the sweltering heat as a paralyzed Gene was carried into court on a stretcher to face Daisy for the first time since the shooting.
“The papers were calling it ‘The Trial of the Century,'” explained Hughes. “Which of course is a risky thing to do in 1912 and when the Leo Frank case happened the next year, there went your so-called trial of the century.”

The Georgian saw the shooting as a way to goose circulation of the newly acquired Hearst paper and the Constitution and Journal were desperate to keep up. Explained Hughes: “The three papers were fierce competitors and the Hearst people immediately started putting out six, seven editions a day and it shook up the city. This squalid little domestic shooting in a good neighborhood was made for the Hearst model. It was ‘Sweetheart, get me re-write’ time. It was newspaper journalism being openly practiced. What appealed to me was that this was a good story with lots of pictures to draw from, interesting people and the great courtroom dynamic of the trial. I also loved the curious Georgia laws at the time where the husband couldn’t testify against his wife but Daisy, without being sworn in, could go on the witness stand and give a statement and poor Gene could say nothing!”

Hughes is now co-writing a screenplay based on the book. He says he’s enjoying his post-WGST retirement. The legendary news talk station finally officially died last fall when WGST’s last big name syndicated talker Rush Limbaugh was snapped up by WSB and WGST became a Spanish sports station. “With the release of this book I’ve had a chance to catch up with many listeners who say, ‘Gee, I miss you on the radio,'” said Hughes. “That’s very flattering but I don’t miss it. Modern journalism where you’re recapping who fell down last night on ‘Dancing with the Stars’ wouldn’t have appealed to me. But I’m proud that from ‘GST’s start up in 1977 and all through The News Monster years and up almost until the end, in a small way, the station changed journalism in Atlanta. That’s something to be pleased about.”