Home Uncategorized RFK Jr.: When it comes to water conservation, Atlanta ‘needs to do... 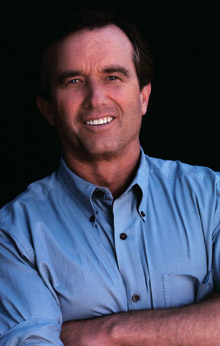 This week, river, lake, and water activists from all over the country will flow to a common delta in Pine Mountain, Georgia, for the Waterkeeper Alliance’s annual conference, hosted by the Chattahoochee and Flint riverkeepers. The event will close out Saturday night with a keynote address from Alliance president Robert F. Kennedy Jr., son of the late Attorney General, U.S. Senator, and presidential candidate, who has made his own name as an environmental crusader. As chief prosecuting attorney for the Hudson Riverkeeper in New York, he helped preserve that urban artery. And in advance of his Georgia speech, Atlanta magazine posed a few questions about our region’s own embattled and unsung waterway.

Atlanta isn’t really a river town. A lot of us tend to forget the Chattahoochee is here. As a riverkeeper, how do you combat that lack of awareness?

You’re right, it’s not really a maritime city like New York or a rivering city like St. Louis, but there are 4 million people in the city who rely on the water coming out of Lake Lanier and the Chattahoochee. I think generally people have some awareness that the use of that water is going to impact fishermen and communities downstream. But the value of keeping the water in the river is probably a story we need to repeat to people. It’s a narrative that people are really responsive to: When they water their lawn, if you put a grass on your lawn that requires a tremendous amount of water, that water would otherwise remain in the Chattahoochee and it would go down in confluence with the Flint River and turn into the Apalachicola—which is one of the largest fisheries on Earth and one of the most diverse—and that water then feeds these great oyster beds, one of the last hand-tong oyster fisheries in North America, and the crabbing and the big fisheries of the Gulf of Mexico. The northern Gulf, especially, all the way down to Fort Myers are extremely reliant on those freshwater flows. So there are people in Atlanta who maybe once a year go to the Gulf and enjoy the seafood and love to see those waters—but that can all be changed. This year, this ancient oyster bed crashed, the population crashed and they are near extinction today—because there wasn’t enough water coming out of the mouth of the Apalachicola.

It has to be our job to make those connections for people. When we were trying to protect New York City water, which comes from the Catskills some 120 miles away, you’d ask people where their water comes from and they’d say, “From the tap.”

You mention that so many other towns and states depend on the water from Lake Lanier for drinking, agriculture, recreation, fishing, navigation, power generation, etc. And of course, that “sharing” between Georgia, Alabama, and Florida has resulted in the decades-long Tri-State Water Wars. As a leader of the national Waterkeeper Alliance, what is your view of the issue in the Southeast?

We don’t really take sides. We’re fighting to maintain flow in all three states. We’d like to see all three states behave well and maintain flows in the river. But in order to do that, you have to maintain the current allocations of water and try to reduce them. Even though we’re probably facing an era of less water due to global warming.

Is there a state that is behaving worse than others in your view?

I wouldn’t say that. I would point out that there was a bill introduced in the Georgia State Senate [SB 213, the so-called Aquifer Storage and Recovery Act] that was actually, finally killed by the Georgia Water Coalition. And that was a boondoggle scheme that was promoted by powerful political insiders that would have given control of the river to insiders and taken it away from traditional right-bearing owners and farmers and downstream communities, and I would characterize that in the bad behavior bucket. And that bill is still out there.

The speculation is that the bill will come back around next session, next year. But, what do you think is the most immediate issue facing Atlantans in regard to the Chattahoochee and our water?

Atlanta has done a good job at leak repair and conservation measures to help offset demand. But the city needs to do a lot more. The Chattahoochee Riverkeeper did a report that estimates there are 150 million gallons per day of water savings still available through modest measures, like leak repair, conservation pricing, replacing outdated plumbing fixtures, and rainwater harvesting. In New York City, we got them to implement common-sense plans to conserve their water, twenty to thirty things that we got them to do like putting keys on fire hydrants, metering, leak repair…The city ended up saving hundreds of millions of dollars per year because there was less water going through the sewage treatment plant. And they ended up with a huge budget surplus that has been there ever since. Conservation helps everybody, in the long run.

Cold Calling: 21 refreshing retreats in the South that offer a dose of nature’s air-conditioning