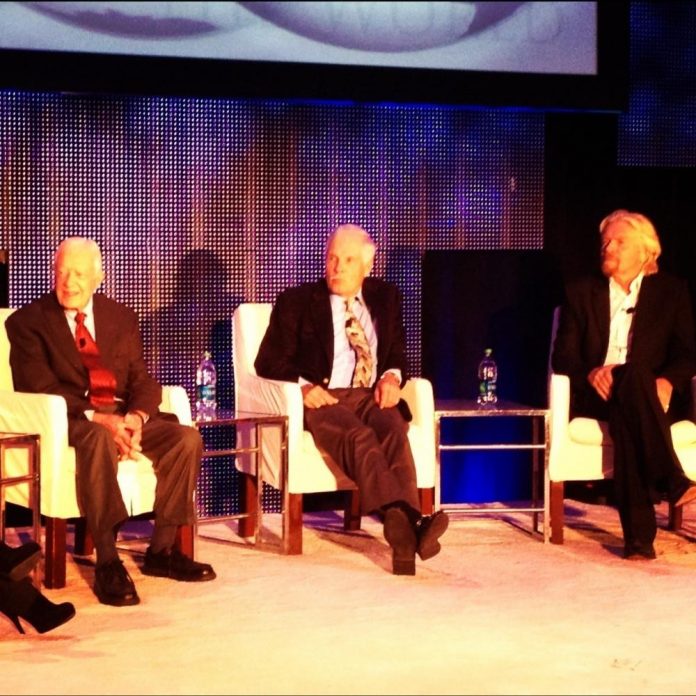 Exactly 21 minutes into a 30-minute conversation between President Jimmy Carter, EPA administrator Lisa P. Jackson, billionaire Richard Branson and CNN founder Ted Turner at Friday night’s Captain Planet Foundation gala downtown at the Georgia Aquarium, the algae-haired superhero’s father smiled for the first time. Scratch that. Ted Turner was grinning from ear to ear. Not coincidentally, the 39th President of the United States sitting next to him had just endorsed the legalization of pot. Hell, Turner even sat up erect in his chair for a split second.

Carter made the unexpected endorsement to huge applause in a response to a question posed by CNN moderator Suzanne Malveaux, asking if he approved of the recent legalization of marijuana in Colorado and Washington. “I’m in favor of it. I think it’s OK,” Carter said onstage in front of a sold-out crowd at the annual eco benefit in the Oceans Ballroom. “I don’t think it’s going to happen in Georgia yet but I think it’s going to be interesting to watch and see what happens.” Carter, 88, took a moment to provide younger attendees with a history lesson. “When I was president in 1979, I made my definitive speech about drugs and I called for the decriminalization of marijuana,” recalled Carter. “This was in 1979! Not for the legalization but for the decriminalization. Nobody needs to be put in prison for having a marijuana cigarette.”

Mary Jane originally wandered into the wide-ranging conversation after Branson (who was presented with the Captain Planet Foundation Superhero for the Earth Award by Spanx founder and fellow billionaire Sara Blakely) shared his views on prison not being the best solution for those with substance abuse issues. “There are more black people in Britain who are taking drugs today than there were slaves in America when slavery was abolished,” Branson reasoned. “The statistics are really frightening. And people with drug problems need help. They don’t need to be sent to prison. Instead of spending the money on prison, let’s spend that money on drug clinics. ”

Reefer-related views aside, Carter, who in 1979 famously installed solar panels on the White House, also used his time on stage to offer current president Barack Obama some counsel on climate change initiatives for his second term. Carter suggested that the country needs to approach global warming by acting globally and uniting with other nations on climate change goals and including China and India, whose track records on industrial chemical and air pollution haven’t been great. “Over the next four years, there’s an opportunity for a great partnership for us to join together in doing something about global warming,” he added. Toward that end, Carter was due to meet with new Chinese president Xi Jinping for the fourth time over the weekend. “I think they’re poised now to to take a leadership role on global warming,” Carter said.

Branson added: “I don’t think, realistically, that we can deal with the problems of global warming by turning back on progress. The way to deal with it is for us to be inventive and use our brain power to come up with the solutions. We can invent fuels to power our aeroplanes that don’t pollute our air.”

Turner hinted that our recent weather could quell the “robust debate” about whether science backs up climate change  as some Republican lawmakers continue to express doubt that global warming is genuine. How do environmentalists change their minds?  “Do what we’re doing tonight,” Turner said.  “You keep spreading the word. We’re getting a lot of help from Mother Nature too with these terrible weather storms that are occurring all over the world.”

While Obama has said he won’t combat climate change in his second term at a cost to U.S. jobs, Carter has a solution on  global warming and jobs. “This can go hand in hand,” Carter explained. “I think there are going to be many opportunities for new jobs and new kinds of jobs in this industry.” Addressing Suzanne Malveaux’s youthful appearance (for the record, she’s 46) Carter cracked,  “You’re too young to remember my administration but we had some bad times economically. However, we had a very vital energy policy and during my four years in office, we created more jobs in a year than any other administration since the second world war. Because we had these energy opportunities that created new kinds of jobs.”

Branson helped to enliven the evening’s live auction, first by donating a stay at his luxurious Necker Island retreat, and then taking over as auctioneer. He ended up selling the vacation getaway to three bidders at a price tag of $65,000 a piece.

Atlanta magazine was the premier media sponsor for the gala benefit.

As the evening’s entertainment, Grammy winner Alison Krauss was tuning up backstage  post-climate conversation, Carter and wife Rosalynn quietly exited the gala for the trip home in an idling unmarked white passenger van flanked by Secret Service men. The Carters, who marked their 66th wedding anniversary this summer, were holding hands.