Home History Just what is that tower in the Old Fourth Ward? 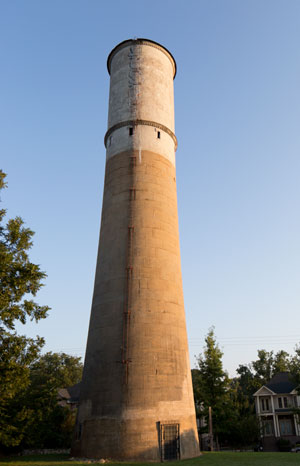 If you’ve found yourself in the Old Fourth Ward—maybe strolling up Irwin Street toward Bell Street Burritos or heading down the Atlanta BeltLine to Studioplex—you’ve undoubtedly spotted that giant concrete tower. And you’ve wondered, Just what is that? Or, more intriguingly, Does anyone live in there?

Here’s the answer to the first question: More than a century ago, that tower was the tallest structure in the neighborhood. In the early 1900s, Atlantic Compress Company commissioned Piedmont Construction to erect a water tank that would accompany the cotton compress factory next door. Completed in 1906, the tower was crafted of a watertight mixture of concrete, mortar, Trinidad asphalt, and gasoline. According to Fourth Ward Neighbors president Matt Garbett, the tower was a “carefully engineered” sprinkler system that exploited gravitational forces. If the factory caught on fire (as it did in 1916), the structure could spew water from the 100,000-gallon tank that engineer H.H. Johnson had balanced in a cylinder 100 feet above ground.

As to the second question: Sadly, there’s no secret clubhouse or artist’s atelier tucked inside the turret. It’s vacant, and the tank no longer holds water. Back in 2009, the tower’s interior served as the backdrop for a video installation during Atlanta Celebrates Photography. Now the structure is owned by the Historic District Development Corporation, which has preserved much of Sweet Auburn and the Old Fourth Ward.