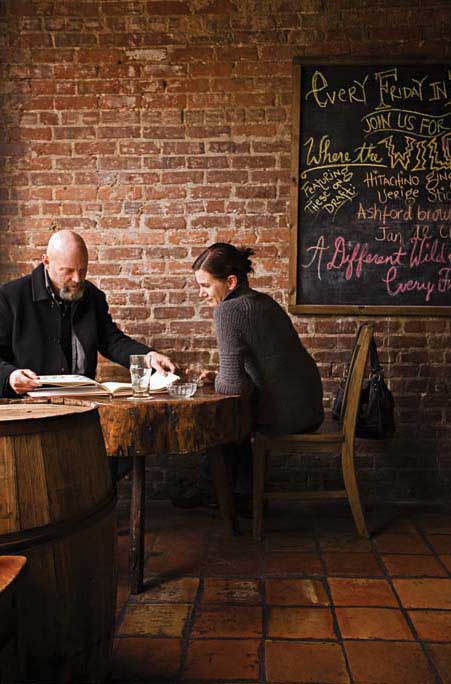 There are more than ninety-nine bottles of beer on the wall behind the bar at The Porter (I counted). There are tap handles by the dozen. The bar could overwhelm even the most dedicated beer drinker with the depth and breadth of its inventory. But instead of just playing a numbers game, the young owners display a curatorial finesse. Better yet, without gloating about running a “gastropub,” they serve pretty remarkable casual food to go along with the lagers, pilsners, Belgian whites, and, of course, their favorite porters.

Without an ounce of snobbery, The Porter will get you interested in trying an elegant Scottish ale that tastes like liquid butterscotch or a German smoked beer with the aromas of hops and wood stove. The staff is there to encourage those who have never, ever paid eight dollars for a glass of beer to move beyond the thirst-quenching product of the big breweries. The helpful beer list—large enough to require a clipboard—is arranged by category rather than region and includes alcohol content and tasting directions.

Thanks to co-owner Molly Gunn and her intelligent questions (“What do you normally drink?” is one of the first things she asks those who hesitate), initial bewilderment soon subsides, replaced by a sense of wonder and adventure. Seasonal casks, monthly beer dinners, and unusual pairings with, for example, earthy truffles or artisanal chocolate maximize the cultural impact of The Porter on a growing community of beer fans, myself included.

Customers who understand descriptions such as “bready malts, caramel center, touch of sour at the end” or “dark with cinnamon and fig notes” are probably the minority at The Porter, and fewer still could instantly think of how to match those tastes with food. But the menu offers revelatory pairings of, say, St. Ambroise Apricot ale with the smoked bacon hushpuppies and organic applesauce or yeasty, effervescent Berliner Weisse with crispy calamari and preserved lemon aioli. (The latter revelation is equivalent to discovering that champagne is the ideal companion to many fried foods.) You may be interested to know that brandade, a Mediterranean dish consisting of creamy salt cod and potatoes, doesn’t have to be served with red wine. Beer brings out its assertive personality just as well and does wonders, too, for fun specials such as meatballs stroganoff or a superlative lemon-marinated shrimp BLT with shaved fennel.

The secret behind The Porter is the pedigree of its owners. Fresh-faced Gunn, who at twenty-six still gets carded when she drinks outside her own establishment, and her husband, Nick Rutherford, the executive chef (a funny title in a beer bar), met when working at the former gourmet gold standard Seeger’s, where a passion for excellence was drilled into them.

Rutherford’s brisket pot roast with mashed potatoes and organic carrots has as elegant a texture as anything I have experienced in the world of slow cooking. A few judicious drops of truffle oil and a saute of cremini and portobello mushrooms give glamour to an impeccable rendition of shrimp and grits. When it comes to more classic bar food, simple items such as the organic bratwurst with kraut and Fuji apples, the fresh Angus cheeseburger on tomato focaccia, and the mussels steamed in beer have been composed as carefully as the above. I’d prefer thicker-cut potatoes in the fish and chips (but I appreciate the Terrapin Rye beer batter), and I am amused by the misspelling of crisp, golden potato rissoles (offered as “resole”), but The Porter’s authority in culinary matters, including beer and cheese pairings, is generally amazing.

A thirty-six-foot unpolished concrete bar backed by plywood shelves loaded with specialty glasses (flutes, tulips, goblets, pints, and the occasional glass boot), mason jars (for the cocktails and beer tastings), and other paraphernalia occupies the long, narrow front room. A huge space at the back offers more conventional seating as well as a mishmash of vintage suitcases alluding to the other meaning of the word “porter.”

Yes, The Porter is noisy (it’s a bar!), and though a special effort is made to attract women, there is more testosterone than perfume in the air. But it’s great news for everyone that, after a long period of drought, Little Five Points should once more offer destination-­worthy meals.

During one of the most magical moments I have experienced at The Porter, I happened to glance at the bar, where every seat was taken and every glass featured the same basic beverage in an astonishing range of colors: chocolate, straw, caramel, tea, ruby, sunshine, amber, toffee, honey, cinnamon. “I am going to try them all,” I thought. “It will take me years.”

This  review originally appeared in the March 2009 issue of Atlanta magazine.