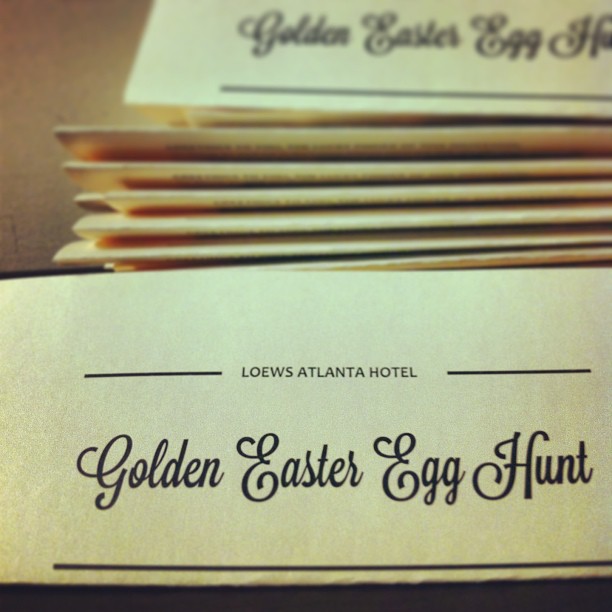 Bored with blinged out Easter bonnets and weary of watching Peeps explode as you torture them in the microwave? The Loews Atlanta hotel is offering a holiday alternative via its decidedly grown up inaugural Easter egg hunt this Sunday morning throughout Midtown.FYI: Be cautious of flying elbows around the Woodruff Arts Center.

This week, on the hotel’s Facebook, Twitter and Instagram (@LoewsAtlanta) accounts, Loews PR folks have been busy dangling tantalizing clues about where the Easter bunny is hiding a series of 10 golden eggs all around Midtown. The prizes inside include a weekend stay in the hotel’s Grand Lux suite, a sushi party for six at Steel Restaurant & Lounge, romantic dream dates and more.

The hunt officially begins at 9 a.m.

Since the Loews folks graciously provided me with an advance peek at the treasure map of where the golden eggs are hidden around Midtown, I can safely tell you this much: wear comfortable walking or running shoes. The eggs are stashed all the way from Monroe Drive to Atlantic Station to Technology Square.

In fact, just looking at where egg No. 1 is stashed in correlation to where egg No. 6 is hidden on the treasure map resulted in the growth of a heel spur on my right foot. Good luck!