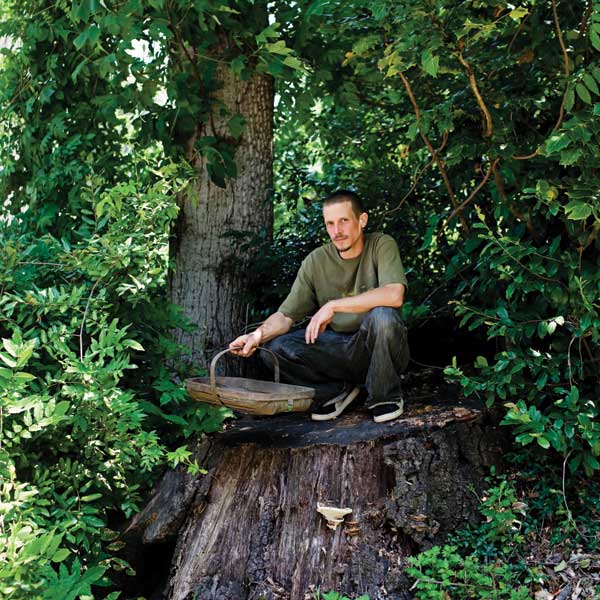 In our age of industrial farming, chefs around the country have begun to look at foraging as a way to add piercing flavors and visual excitement to their dishes: While indigenous, these wild edibles can seem exotic in their unfamiliarity. It’s a natural extension of the locavore movement, but in Atlanta, it’s also a way for Southern chefs to reconnect to their culinary roots without falling back on regional cooking cliches. Plants gathered deep in the woods or on the margins of cultivated lands now routinely show up on some of the fanciest tables in town.

An early passion for tracing Southern food to its sources led Linton Hopkins of Restaurant Eugene and Holeman and Finch Public House to the Foxfire series, a compendium of articles written about life in Appalachia that have been popular with folklorists and back-to-the-land survivalists since the 1960s. Several years ago Ed Taylor, the treasurer of Georgia Organics, introduced Hopkins to Michael Hendricks, a dedicated forager and the manager of Taylor’s North Georgia farm. Hopkins became the first prominent local chef to take advantage of Hendricks’s skills, and Hendricks now supplies wild lettuces, mushrooms, and other finds to several restaurants around town.

Few foragers like to divulge their secret spots, but Hendricks, a quiet young Atlanta native, took me all over Taylor’s property, Indian Ridge Organic Farm in Clarkesville near Toccoa. Hendricks lives in a tiny cabin and manages a large vegetable garden set deep in 200 acres of land fed by natural springs. I nibbled enthusiastically as we traipsed through pastures and wooded areas, looking for nearly invisible shoots of wood nettles, wild horseradish, magenta spreen, sweet violets, lady’s thumbs, chickweed, dandelions, jewelweed, and feathery mustards topped with yellow blossoms, all hiding in a tapestry of green. Where I saw only weeds, Hendricks pointed at hundreds of edibles, motioning toward more remote areas where he hunts for chanterelles, morels, black trumpets, blue foot, and chicken of the woods mushrooms after the rain. Hendricks began teaching himself to forage using books (and guidance from Taylor) four years ago. He says that every outing is still an education, though only those finds that he knows to be unquestionably safe make it to restaurants.

You can find Hendricks every Saturday at the Peachtree Road Farmers Market. He mostly sells obscure heirloom vegetables from the garden (in July, look for the bitter cannibal tomato, which is really an eggplant, and albino peppers), though he also brings smaller amounts of foraged chanterelles and other mushrooms, as well as wild greens. If you ask, he’ll offer some advice about finding ingredients for dinner in your own backyard.