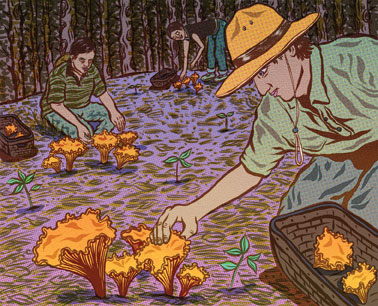 “This wouldn’t happen in California,” said Federico Tobon, a recent Los Angeles transplant working as a solar installation consultant at Georgia Tech. “People pick them right away!” Five of us were foraging at Candler Park this summer, after weeks of biblical rain had made for plentiful mushrooms. Our eyes were trained on the mossy ground under oaks and conifers, where golden chanterelles had risen in clusters—known as a “flush”—with their fleshy orange and yellow caps shaped like blousy tulips.

We filled our bicycle baskets with these prizes, laughing: Golden chanterelles shipped from out West usually go for $29.99 per pound at Whole Foods. Chanterelles grow through the summer and early fall on the East Coast, and the ground around us held both promise and peril.

“The look-alike chanterelle—called the jack-o’-lantern—has gills, not veiny ridges,” warned Tobon, who describes himself as an avid forager but an amateur mycologist. “You don’t want to eat it!” “Will it kill you?” I asked. “No,” he said. “But you’ll get sick.”

We biked over to the grounds of an intown learning center (I swore not to disclose which one). Joe Goodman, Tobon’s boss, showed up wearing a ranger hat. He led us into an overgrown thicket where old furniture rusted and snakes slithered. There had been talk of searching for Psilocybe atlantis, a rare psychedelic fungus thought to be found only in Fulton County. But we had chanterelle fever, and we headed back to the fields where they were sprouting.

In the end, we harvested nearly ten pounds; I refrigerated my share and sauteed them in butter the next morning. My uncle watched. “The last time I had ‘wild’ mushrooms,” he said, “I woke up in a white suit in a field.” He turned down the delicacy, which meant more for me. 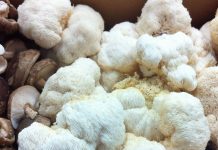 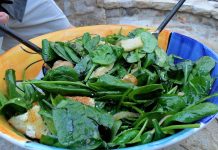