Home Uncategorized Our Place in the Universe: No. 16 for hipsters 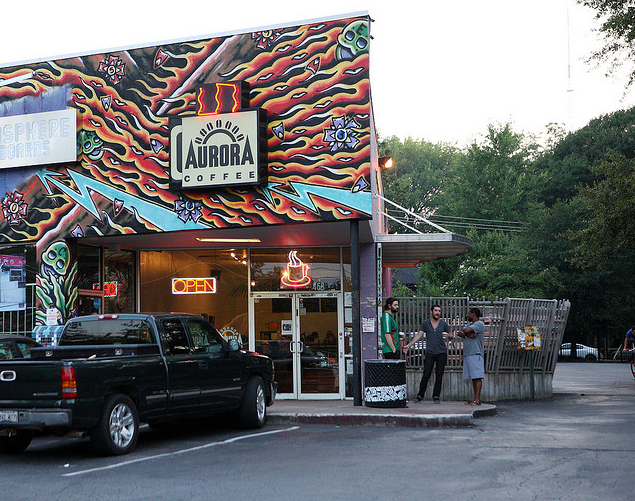 Are you an artsy person looking for a walkable place to live in Atlanta overflowing with all the coffee shops and indie dives necessary to satiate your unconventional desires? Well, you’re in luck! Because we have Little Five Points—the sixteenth most hipster neighborhood in the country, according to a recent article by Forbes.

Um. Is it the nineties?

Don’t get me wrong: I love Aurora Coffee and L5P’s annual Halloween festival as much as the New York–based writer who put together the Forbes list, but it’s been more than a decade since the neighborhood’s hip heyday. Of all of Atlanta’s ‘hoods to highlight, I feel like we can do hipper.

What about Old Fourth Ward? You can’t find a better place to party on a Saturday night, what with the hipster trifecta that is Sound Table (dressy hipster), Church (casual hipster), and Noni’s (sweaty hipster). Plus: a place that specializes in ramen (if only during lunch), another that features a speakeasy, a restaurant that serves glitter pizza, and a pretentious spot to play videogames and drink cocktails. However, I can see why O4W may have not made the cut: I don’t know a single person who lives there who hasn’t been robbed at least once, so it hasn’t fully completed the gentrification checklist that Little Five finished in the aughts. But does that make it more hipster or less? Hmmm… Are hipsters the vanguards of gentrification or the stalwarts trying to stave it off? Talk amongst yourselves.

Or Westside? Forget the fact that it has some of the best independently owned restaurants in the city (Miller Union, Optimist, Bocado, I could go on); it has an entire bohemian arts area named after goats. Goats! All the home design shops, the Westside Arts District, and our city’s most notable coffee shop don’t hurt the region’s hipster cred either. Then there’s the stuff that while still not yet there will score the district major hipster points come opening, like the forthcoming BeltLine-approved Westside Reservoir Park. Speaking of parks, I also feel the need to include our city’s food truck park within the locale’s nebulous definition, if only because it’s on Howell Mill. I’m pretty sure when you tally up all those elements, Westside is the standout winner of the title for the most hipster Atlanta community. But hey, I just live here.

FYI—in case you’re the sort of person who cares about all the rankings and wants to feel inferior—Silver Lake in L.A. scored the number one spot, and two different Portlands beat us in the hierarchy.