Home Uncategorized Pouring Over the Past 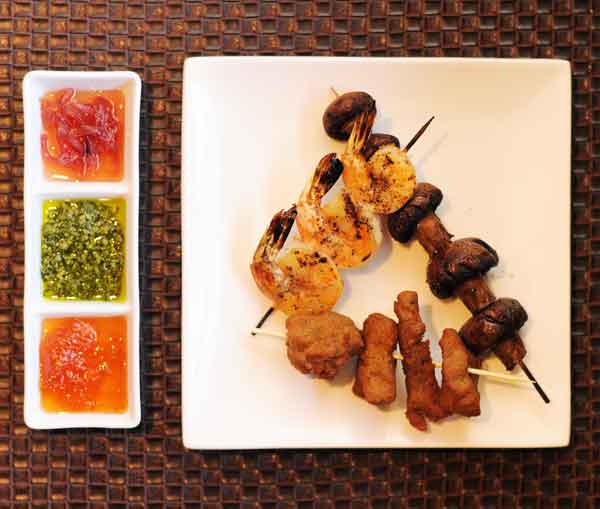 Whatever happened to sauces? If they appear at all on the dishes served in many modern American restaurants, sauces tend to hide meekly under a hunk of protein. I understand why young chefs who carefully source vegetables and meats from within a hundred-mile radius do not want to disguise their flavors or blur the contours of a composition. Eliminating sauces altogether, though, dismisses a component that helped cooking evolve into an art form. Sauces used to be the hallmark of a professional kitchen. They linked the ingredients on a plate. They added glamour to simple preparations. At their best, they imparted richness without heaviness. I can still recite the names of French mother sauces—beginning with béchamel (flour, butter, and milk transformed)—and their variations like an incantation: hollandaise, béarnaise, velouté, espagnole, bordelaise, Mornay, Périgueux, Nantua . . .

When nouvelle cuisine, a reaction against classical French cooking, launched an attack on the wizardry of sauces a few decades back, jus (a simple process of deglazing the juices in a pan with anything from water and stock to soy sauce and booze) and beurre blanc (butter with shallots and vinegar or lemon, mostly used with seafood) came to the forefront on both sides of the Atlantic. More recently, I blame the enduring popularity of the Mediterranean diet and its reliance on olive oil for dealing a near-fatal blow to stock- and cream-based sauces.

Like the rest of the country, Atlanta has pretty much fallen out of love with both the hedonistic French sauces and nouvelle cuisine’s concentrated juices and purees—particularly the ones used to paint abstract shapes or make cute dots on plate rims. Our lust for global flavors is at its peak; the sauces of the moment are likely to be Spanish romesco made with peppers and pounded almonds, Argentinean chimichurri with lots of herbs and garlic in olive oil, rustic meat ragu inspired by Italy, or Hong Kong–style XO made with scallops, dried fish, and chiles.

In a bizarre twist of fate, sauces currently flourish as dips and toppings for casual foods such as burgers and fries. Yeah! Burger offers a dozen “premium sauces” at twenty-five cents each, including sunflower pesto and bacon jam, on top of its grass-fed patties. When you order the twice-fried pub frites at Leon’s Full Service in Decatur, you choose two free sauces—among them many flavored mayonnaises and ketchups, but also Massaman curry and peppercorn gravy. The Fry Guy, a food truck, evokes Belgium with pommes frites, gravies, and “sidewalk sauce” made from mayo and tomato ketchup with raw onion. I adore the rich, sour cream–based tzatziki dripping from the gyros at Nick’s Food to Go on the edge of Downtown, and the smooth green avocado salsa that comes with the Peruvian chicken at Decatur’s Las Brasas.

When Ria Pell of Ria’s Bluebird in Grant Park decided that she needed a nighttime counterpoint to her old-fashioned breakfast place, she opened Sauced, a pun-heavy, loungy spot with a menu full of retro finger food. Her signature “sticky fingers” combines a choice of skewers—Georgia white shrimp, chicken, falafel, cremini mushrooms, and a wheat-based meat substitute she calls “nauga bone”—with homemade sauces such as tomato jam, peach-habañero sauce, pesto, and various gastriques (reductions of sugar and vinegar). Her braised, brown sugar–cured pork shoulder comes with a proper mustard jus finished with butter, and one of the new desserts is a fried apple pie sauced with pork belly caramel.

For those who still love classic sauces, the steakhouse is often the place of last resort. There, at last, the menu offers the option to revel in egg-enriched béarnaise or hollandaise and au poivre brandy sauce. I was shocked and delighted to find a proper sauce Choron, an old-fashioned variation of hollandaise flavored with tomato, at Viande Rouge in Johns Creek. A few weeks later, I almost licked the ramekin of remarkable peppercorn sauce, made in the style of a buttery marchands de vin with red wine, that a prescient dining companion ordered with the cowboy rib-eye at Kevin Rathbun Steak.

If you miss the days when sauces were more like a noble coating, a glossy mantle adding depth and mystery to a preparation, you should head straight for Restaurant Eugene. Chef-owner Linton Hopkins is a former saucier who at one point made reductions and beurre blanc ten to twelve hours a day. “I can’t think of cooking without sauces. They add flavor and texture; they reinforce the critical element in a dish,” he says. For skillet-seared steak, his kitchen crafts a sauce Armagnac—butter, shallots, and bay leaf simmered together until almost dry, then emulsified with housemade veal jus, cognac, and a splash of cream. Hopkins pairs Nantucket bay scallops, whose season begins in November, with velouté (a stock-based white sauce) enhanced with Jerusalem artichokes, white wine, and Parmesan. Hopkins prefers sauces poured tableside, noting that many restaurants commonly add xantham gum or other stabilizers to sauces plated in the kitchen—they slosh less on the way to the table (and then often impart a tacky mouthfeel when they cool).

Thinking about sauces conjured an insatiable nostalgia for the tastes of my French childhood. It led me recently to Violette, a stalwart on Clairmont Road that still serves an acceptable version of bouchée à la reine, an individual vol-au-vent of puff pastry filled with sliced chicken breast in a white cream sauce with mushrooms. Despite the terrible converted rice and anemic sauteed vegetables that surrounded the plate, and the fact that the pastry tasted like a premade product, I felt as happy as an expat baby boomer who’d found a tuna noodle casserole made with Campbell’s soup in the recesses of Paris. 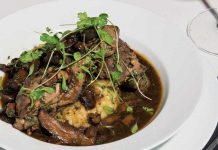 Review: With the Brasserie at Bazati, French chef Rémi Granger makes a case for the classics