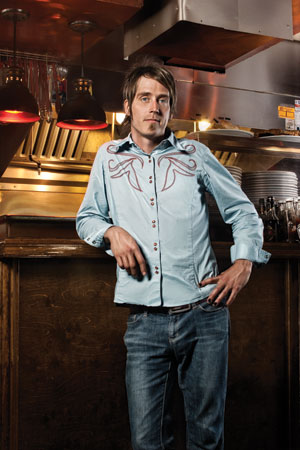 Fans of the band Mike LaSage and the Stumbling Troubadours may be surprised to hear that, when not performing a mix of alt-country and rock, its young lead singer/guitarist cooks in a pub, where he is the resident barbecue idol. LaSage, who has been the sous chef at P’cheen in the Old Fourth Ward for the last three years, currently gets his moment of glory every Monday night, when he takes over the kitchen and puts his stamp on a special menu consisting largely of pulled pork, ribs, homemade sausage, and chicken with four classic sauces.

For me, the highlight of Mike’s Bone Lick BBQ Mondays is the “one rib” option, which references the movie I’m Gonna Git You Sucka in which Chris Rock keeps asking, “How much for one rib?” One fabulous, deeply smoked, thickly cut baby back rib with a light squeeze of the “original” barbecue sauce made with cider vinegar and chile peppers is a perfect $3 snack. Of course, once I get the taste in my mouth, I may spring for more or branch out with the sausage special (house-made andouille or kielbasa, for example), slowly smoked over hickory and white oak in a custom-built contraption that began life as a propane tank.

As a barbecue aficionado, LaSage has the ultimate respect for the dry rub. His has sixteen ingredients, including orange and lemon peel, ground chipotle, and sugar. One of the many things I love about having barbecue at P’cheen once a week is the fact that the sides aren’t gunked up with seasoning and provide a nice contrast with the meat. The macaroni and cheese comes with fat raw slices of jalapeños; the coleslaw is chunky, crunchy, and vinegary; and the collards are stewed with tender morsels of pork.

For those who can’t free themselves on Mondays, P’cheen has pulled pork, chipotle-rubbed smoked chicken, and ribs nightly. LaSage and his boss Alex Friedman, a terrific cook who co-owns P’cheen with former DJ Brit Keiran Neely, have started smoking their own hams, and occasional treats such as barbecued goat keep the customers happy and interested in venturing beyond burgers, curries, and other standbys on the menu.