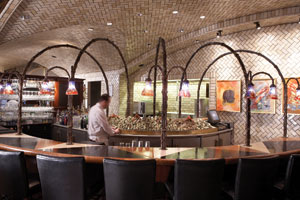 Ordering lobster in a restaurant can be a harrowing experience. What if you miscalculate and get stuck with a specimen that will drain your savings? What if you make a fool of yourself trying to crack the hard shell?

One of Pano Karatassos’s early strokes of genius was to understand and manage the challenge. Originally developed for Pano’s & Paul’s, the fried lobster tail became his stock in trade. The Lobster Bar, a beauteous space beneath Buckhead’s Chops that resembles the historic Grand Central Oyster Bar down to the stunning tile work and ceramic arches, didn’t exactly democratize the lobster dinner. But because it offered smaller “chicken lobsters” at a relatively affordable price, the room rapidly evolved as a place for special-yet-not-completely-bankrupting occasions.

The best value in my book is the three-course “Lobster Fest” for $49 per person. Work out a deal with your tablemate so that one of you begins with the rich Maine lobster bisque and the other gets the creamy lobster mac and cheese. Follow suit with South African lobster tail (flash-fried and served with drawn butter and honey mustard) and the “Lobster Lobster” option (a one-and-a-half-pounder split, cracked, and topped with lobster stuffing). You can pick two sides, including fresh corn mash or brussels sprout leaves with mushrooms. The only reason to soldier through a stomach-stretching white chocolate banana cream pie or a crème brûlée denser than a pudding is that they come with the prix fixe.

If all you want is a glass of wine and a nibble of lobster at the bar, the awkwardly named “Morsels of ‘Our Signature Creation’ South African Cold Water Lobster Tail” ($26 and big enough to share) is a fine idea. I am shocked by the wine list’s lack of interesting rosés, my favorite with lobster. The glamour of the room, though, remains one of the Johnson Studio’s greatest homages to a bygone era. 70 West Paces Ferry Road, 404-262-2675, chopslobsterbar.com