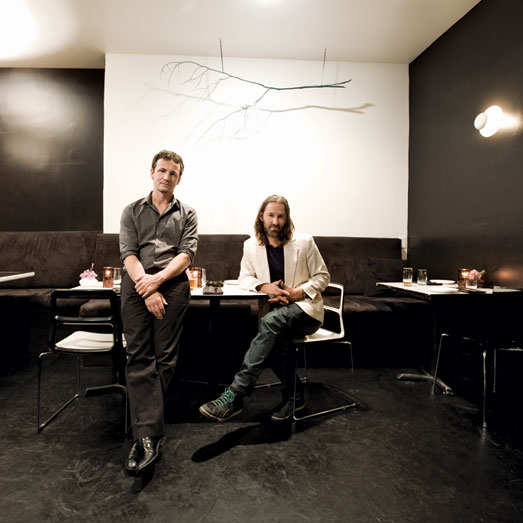 Part of what made Top Flr special when it opened in the summer of 2007, around the corner from Mary Mac’s Tearoom, was its ingenious floor plan: a sliver of a bar and a mysterious dining room accessible by a steep staircase that hid behind a narrow, monochromatic facade. It looked like it belonged in London or Dublin. The interior was mod and dark. And even though there was nothing terribly clever about the food, the dishes felt lean and elemental. The prices were great, too, and the bartenders knew how to keep the clientele interested.

Like magicians pulling something rather large out of a hat, co-owners Darren Carr and Jeff Myers recently managed to double the size of Top Flr without losing the beguiling intimacy of their space. “We gobbled up a Laundromat and expanded a bit at a time,” says Carr. This gradual approach formed a perfect mirror image of the original downstairs plus a lovely alcove with a single, large table. The same muted colors and low lights create unity.

The menu has grown in scope as well. Shane Devereux, a Philadelphian who has been in the kitchen nearly a year, cures his own duck prosciutto, experiments with sweetbreads, offers a delicious dried Mission fig pudding cake made by his wife, and, overall, gives more structure to the menu. A tiny rack of lamb with a spoonful of intense fig glaze is among the best new dishes. And the creative cocktail tradition continues with new bartender Heather Hawkins. She concocts the Fancy, made with pistachio milk, house-infused rosemary vodka, agave nectar, and egg-white froth.

An increase in Top Flr’s popularity brought a more mainstream clientele. Those who identify with Carr’s and Myers’s more progressive sides will, no doubt, follow them to the Sound Table, their restaurant-club concept on Edgewood Avenue that opened in April. It has a revolving roster of DJs and a menu inspired by Asian street food. Top Flr: 674 Myrtle Street, 404-685-3110, topflr.com