Home Uncategorized Romeo Cologne: Ready for show No. 1000 at the Clermont Lounge 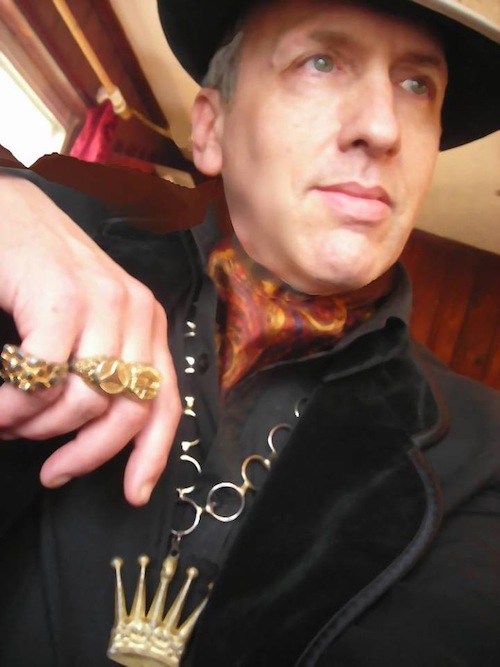 Like other prophets before him, Romeo Cologne experienced a vision and then unearthed his sacred talismans from a lowly, unlikely place.

In the mid-1980s, he had a premonition about a Dumpster dive that eventually came to pass and yielded a large stash of old albums by James Brown, the Gap Band, P-Funk, and others. He cleaned them up and studied them reverently, and David Pierce, a rangy, boheme musician and visual artist in Athens, was transfigured into Romeo Cologne, high priest of funk and an old-school deejay with an indelibly syncopated gospel, swiveling hips, and a big set of disco balls. He eventually brought his retro party to Atlanta, for Velvet and Color Box, before ending up at Star Bar and the Clermont Lounge.

Romeo Cologne works from a well-worn playlist, which features crowd pleasers like Michael Jackson, but he delights in educating audiences about other artists such as The Bar-Kays, Carrie Lucas, and Georgia native Hamilton Bohannon, so each show moves to its own groove. “I try to add a layer of artistic context to it,” he says. “I’m intimate with where the beats change, so I let the music and the crowd’s energy guide me in creating a narrative and building the music to a climax. Every night is Black History Month at my gigs.”

Cologne works two Tuesdays a month at the Star Bar, and on the evening of Saturday, March 1, he will celebrate his thousandth Saturday night spinning vinyl at the Clermont Lounge. “Funk is more than a philosophical force,” he says, “It’s a spiritual release that has never let me down. This will be a serious party.”

Expect to see this impresario, who calls himself “the last of the white peacocks,” in a cummerbund, blaxploitation-flick hat, and some 6-inch platform shoes “with ankle support for dancing.” His act derives almost as much from his sartorial statements as from his music selections. Cologne, 60, who lives near Belvedere Park, hits a different thrift store just about every day. “I’m very particular about my pinstripes, and shag carpet is an essential part of my life,” he says. “Besides, I just don’t look good in modern, normal clothes, so I wear what I wore as a young man.” Meaning polyester leisure suits, wide lapels, and tight, Sansabelt slacks, lavishly accessorized.

“It’s a combination of Hollywood regent and king pimp or foppish court dandy,” he says. “I’m going for a visual creation that honors the outlandish and overdone, and to me this look says ‘royalty,’ with its epic heraldry, its velvet carriage and lovers and angels. I call it: High Pimp.”

And, while other trends come and go, funk and High Pimp remain timeless, he observes.

“Will people still be dancing to today’s Top 40 music 30 years from now? I doubt it,” he says, adding, “I’m not the only pimp at my late-night Kroger. There’s another dude there who is older than I am, and I just hope I still have his style when I’m that age.”