Home Eldredge ATL So, you think you know the Beatles? 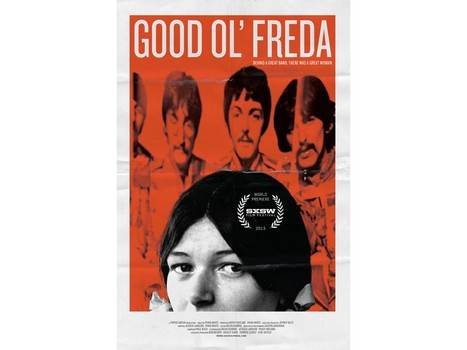 If Oscars voters have any sense at all, “Good Ol’ Freda,” the brand-new Beatles documentary by Ryan White, will follow “Searching For Sugar Man” as the next Academy Award-winning film about an overlooked gem in rock n roll history. Director and Chamblee High School graduate Ryan White’s latest film, playing Saturday night at the Atlanta Film Festival, is just that good.
For Beatles fans, the story of the band’s fan club secretary Freda Kelly is an untapped gold mine of stories told by a woman who values who her Grandma tea mug more than the priceless 50-year-old Beatles artifacts stashed in her attic.
As a kid, White first met the fiercely private Kelly through his uncle Billy Kinsley, who astonishingly enough was a member of the Merseybeats, musical peers of the Beatles on the Liverpool music scene in the early 1960s. But Kelly had never spoken publicly about her years with the Beatles until White approached her with the idea about a documentary.

“I only knew her from chit-chatting at family weddings,” White says laughing. “I didn’t know her that well. I knew I really liked talking to her but my aunt and her girlfriends all came out of that same Liverpool music scene and they now work as secretaries or teachers or in a shop. Everyone was somehow connected to the Beatles back then but they don’t really discuss it. I just always thought Freda was this legal secretary. I never knew the backstory.”

Kelly opted to speak now as a way of recording her stories for her three-year-old grandson Niall. Explains White: “She wanted to record this crazy decade she lived as a legacy for him. She jokes that she’s living on borrowed time and she wanted to get these down.” Kelly was with the Beatles from their days playing the lunch sets in the dank Cavern Club and was the last person out the door in the early 1970s long after the band had ceased speaking to each other.
She was there in the barbershop, sweeping up mop top trimmings to mail to fans around the globe and there, pillowcase in hand, on Ringo Starr‘s front stoop asking his mum if she could get her famous drummer son to sleep on it for a fan.

Kelly is a complete charmer. Prepare to fall in love with her as White asks her, “Did you go out with any of them?” and a giggling Kelly replies, “I don’t want anyone’s hair falling out or turning curly. That’s personal.”
And that’s what makes Kelly’s story all the more compelling. She is perhaps the last survivor from the band’s inner circle who has never sold her story to the tabloids or written a tell-all book about her time with the Beatles.
“For me, the whole point of the movie is about Freda and her extreme privacy. Her story has always been hidden from the world. This movie is about a woman and her loyalty to these four guys, a loyalty that still is in place today.”

Before White’s cameras began rolling, Kelly had one ground rule: There would be no talk of drugs, sex, break ups or affairs. “That was fine with me,” White says simply. “All of that is well-documented elsewhere. As a filmmaker, that isn’t the kind of movie I would want to make anyway. That’s not what I want to do with my career. I’d rather make an interesting portrait of this amazingly loyal woman.”
Using a wealth of photographs and rarely seen archival film footage, woven in with fresh footage of Kelly walking through the iconic places the Beatles once lived and played, White effectively transports Beatles fans back to Liverpool in the swinging sixties.

When Kelly joined White this week for the world premiere of “Good Ol’ Freda” at SXSW in Austin, her daughter came up to White afterward and thanked him for finally getting her mother to tell the stories she had never heard growing up.
“More than anything, I was thrilled because Freda was thrilled with the film,” says a relieved White. “The crowd gave her a standing ovation which rarely happens at festivals. It was a really special night.”

In addition to Kelly’s fascinating stories about the Fab Four, White achieved another coup for “Good Ol’ Freda” — the use of four Beatles songs for the doc’s soundtrack signed off on by Paul McCartney and Starr themselves. White’s first meeting with the suits at Apple Corps happened to be the same day when the AMC drama series “Mad Men” made headlines by shelling out $250,000 for the use of “Tomorrow Never Knows” from the band’s “Revolver” LP for a season five episode.
“I was incredibly intimidated,” says White. “Being granted the use of these songs is a true testament to Freda and how the Beatles feel about her. I’ve come to find out that when the Beatles end up supporting your film, you’re in pretty good shape. It’s a clean, honest, true story of a pretty remarkable woman. People were really supportive of having her story told and told well.”

“Good Ol’ Freda” will have its Atlanta premiere as part of the Atlanta Film Festival Saturday night at 9:15 at the Druid Hills Baptist Church. White will be on hand for a post-screening Q&A.