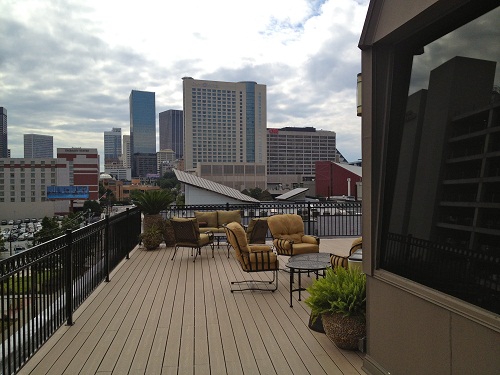 Southern Patio sought out a space to showcase its beautifully designed planters surrounded by office and conference space to host clients. They were attracted to the 100-year old bones of 330 Marietta Street in Downtown Atlanta’s Luckie Marietta District due to its exposed brick, hardwood floors, heavy timber columns and ample natural light. Architects John Boggs and Travis Vickers of BoggsVickers created the space plans and initial interior design for both the third and fourth levels of the building.

On the third floor, Southern Patio and BoggsVickers had a vision of an “open-space” feel for two key reasons. First, to create a relaxed, yet creative environment for customers as they are shown the wide array of high-end planters Southern Patio sells. The third floor also houses their design team, who use the inspiring character of the space to encourage customers to become part of the design process as they choose shapes, textures and finishes together. Secondly, Southern Patio wanted to maintain the original rustic appearance that the building offered, while layering in contemporary accent pieces, fixtures and furniture offering a blend of the old and new.

The fourth floor, which houses the majority of Southern Patio’s leadership team, offers a more conservative office look, including three executive offices and conference room with a large boardroom table. However the more traditional fourth floor feel is balanced by a 1,000 square foot rooftop patio, which was designed for entertaining customers and having casual employee cookouts. The patio has panoramic views of the Midtown and Downtown skylines including the Georgia Aquarium, CNN, Philips Arena, and the Georgia Dome.