“Conan” fans are no doubt still celebrating from last week’s announcement that the late-night talk show has been picked up for two more years by Atlanta-based TBS. Or as Conan O’Brien himself put it: “I’ll be taping episodes of ‘Conan” well into the Ron Paul presidency.” On Monday, TBS sent us more good news for fans: The free Team Coco tablet app is now patiently awaiting your download in the iTunes app store. Presented by launch sponsor AT&T, we’re told the tablet app (available for both iOS and Android platforms) will feature Automatic Content Recognition. ACR is the tech geek way to explain the app’s awesome real-time features as viewers tune into O’Brien each night. The app was designed to deliver as many as 25 pieces of exclusive synchronized content throughout each episode, including video clips, live billboard comments, background info on guests, polls and quizzes plus Facebook and Twitter feeds.

Cue the talking TBS suit to explain it all in concise  layman’s terminology. “‘Conan’ draws the youngest and most digitally connected audience in late-night, so it makes perfect sense that Team Coco is the first in late-night television to create a synchronized app for fans,” explains Dennis Adamovich, senior vice-president of brand and digital activation for TBS. “With this new app, Team Coco is transforming ‘Conan’ into an immersive, interactive experience.” At deadline, the app’s developers were still working on a 2.0 feature that will allow viewers to re-style O’Brien’s hair at will from the comfort of their couch via iPad.

Given “Saturday Night Live” cast member Fred Armisen‘s unhealthy obsession with “The Lawrence Welk Show,” this probably should not come as a shock. Between performances of IFC’s “Portlandia: The Tour” at the Variety Playhouse, the comic was spotted breakfasting on oatmeal and coffee at Spice Market inside the Midtown W. Yes, you read that correctly. Oatmeal. Alas, the wait staff has thus far chosen to remain mum on unsubstantiated reports that Armisen requested raisins on the side. . .

BRAVES SEEK BAND OF THE YEAR

Local bands have until March 9 to apply for the opportunity to rock The Ted this baseball season as one of the acts hand-picked to play for fans this summer prior to home games. But in order to score the venue’s coveted Braves Band of the Year distinction (not to mention s sweet free suite for you and your bandmates to enjoy during the first 2013 homestand), you’re going to need some intense fan loyalty. And we’re not talking about fans who are willing to drive across state lines so you can take home .003 of the door in a Alabama dive bar at 3 a.m. either. Ask yourself this — are the fans of your band actually willing to get out of the $14 beer line at The Ted and cheer you on as you take the stage on the field? We’re told the Braves’ entertainment staff will be judging each band on “crowd participation and enthusiasm” in order to determine the band of the year. Atlanta acts that have previously rocked Turner Field include Ben Deignan and Yacht Rock Revue. Musical acts wishing to apply can go to the 2012 Braves Band Search page on the Braves website. 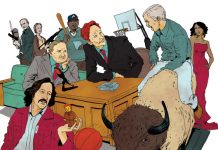 Guest Star of the Year: Conan at the Tabernacle 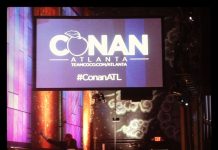