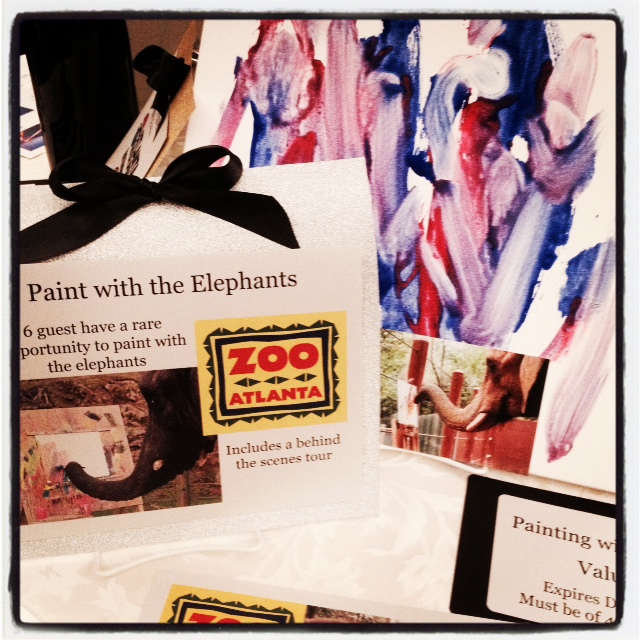 There were opportunities to ride in a NASCAR pace car, getaway to wine country and dine in style at master chef Franck Steigerwald’s private table Saturday night at the American Cancer Society’s Birthdays Ball at the Ritz-Carlton Buckhead. But dollar for dollar, nothing beat the rare opportunity to paint with the African elephants at Zoo Atlanta during the evening’s spirited live auction. The private painting session for you and five of your closest animal and art aficionados ended up pulling in $5,000 for the charity, retaining 100 percent of the experience’s estimated value (given that the pricey pachyderms each eat about 300 pounds of food a day, the five grand should just about cover the painting session’s catering bill). The black tie fundraiser, presented by Delta, Georgia Power and Radiotherapy Clinics of Georgia was an evening dedicated to raising money and to raising awareness about the iconic cancer nonprofit celebrating its centennial birthday in 2013.

American Cancer Society CEO John Seffrin put things into sobering context for those not around when ACS began. “When we were founded in 1913, any major diagnosis of cancer was a virtual death sentence only to be preceded by a prolonged period of pain and suffering,” Seffrin explained. “Tonight is about birthdays and progress because, today in America, two out of three people diagnosed with cancer survive. There are now 28 million cancer survivors in the world. Tonight we need your help to finish that fight and make it three out of three.”

For Anthony Wilson, the evening’s event chair and Georgia Power executive vice-president for customer service and operation, the fight against cancer is deeply personal. He recalled a phone call he received from his wife Tonya on November 19, 1996. “It’s that call that no one ever wants to get,” he remembered. “Some of you have gotten that call.” The couple’s daughter Katie, six months old at the time, was at the pediatrician’s office for her six-month check up. But the doctor was more focused on Meghan, the Wilsons’ two-and-a-half year old, who was looking pale. A blood panel was ordered and Megan was diagnosed with acute myeloid leukemia. “It’s an adult form of leukemia and it’s a very rare cancer for children to have,” Wilson recalled. The panicked father repeatedly asked the doctor what his daughter’s prognosis was. Finally he was told, “Your daughter has a 10 percent chance to live five years.” Wilson then refused to let his daughter be treated, telling the doc, “I don’t want her last few weeks or months to be spent like that.” The doctor went silent for a moment and then he leaned forward and told Wilson, “How do you know she’s not the one in 10?” Explained Wilson: “That was the answer we needed and we embarked on the fight. Many of the protocols Meghan benefited from were funded from evenings like this. So if there’s ever any doubt you’re making a difference, I’d like you to meet someone. . .”
Meghan, who’s now a freshman at Auburn University student walked out and hugged her father to a standing ovation.