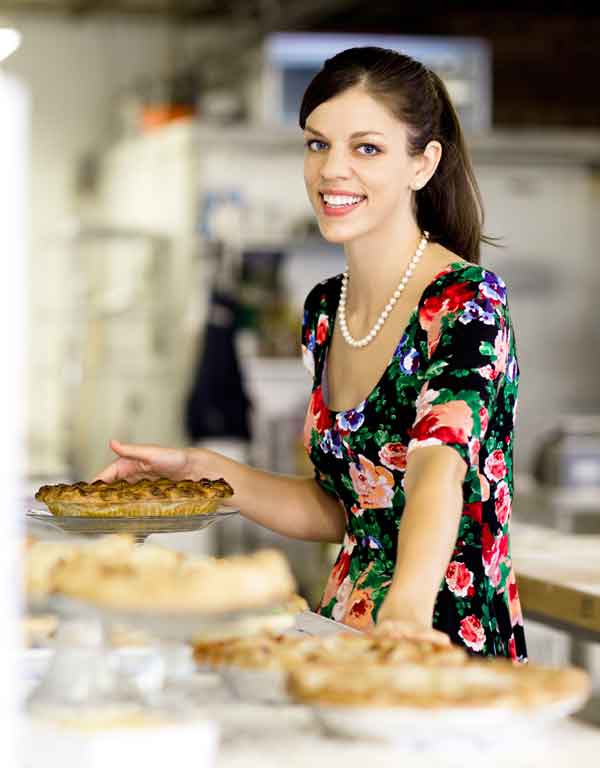 If you met Mims Bledsoe, owner of Buckhead’s delicious new Pie Shop, on the street, you’d never guess what she does for a living. There is something about this tall woman with the coltish beauty of a young Julia Roberts that says good breeding, old money. Her patrician mother looks even more incongruous washing dishes behind the counter, keeping an eye on her twenty-seven-year-old daughter, whom she clearly thinks shouldn’t be alone at 11 p.m. on a Saturday in an isolated space that used to be a commercial bakery.

Bledsoe is named after her great-great-great grandfather, John Floyd Mims, who was mayor of Atlanta in 1853, and she was raised with a deep sense of place. She started her business after graduating with a degree in philosophy because she felt that making handmade pies was a dying art. She saw it as “the perfect combination of novel, nostalgic, challenging, and feminine.” And indeed, the pies lined up behind the counter have a charming, handcrafted look. Some are topped with lattice; others hide under a solid sheet of dough or spill their filling from between a diamond-shaped form pinched at the corners. The menu changes every Tuesday, and so far the favorites have been peach, cherry, apple, coconut cream, banana-caramel-macadamia, apricot-almond, and fig-mascarpone. Blackberry, Muscadine, and fresh pumpkin pies will have their seasonal turns.

One whole pie (most sell for $30 to $35) feeds “one girl after a breakup, four high school boys, eight to ten dinner party guests, or twelve ladies who lunch,” says Bledsoe. She also sells individual slices for $4.60. Savory quiches, peanut tassies, apple dumplings, miniature fried pies, and boxed old-fashioned candies complete the inventory. A sweet, informal seating area with a large community table and a wall of silvery, handwritten quotes about pie serves as a tiny salon, especially on Friday and Saturday nights when the shop stays open for “late-night pie” until 1 a.m. 3210 Roswell Road, 404-841-4512, the-pie-shop.com