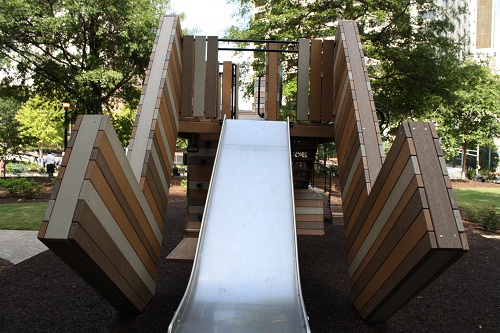 Delano, Minn.-based Landscape Structures Inc. engineered and constructed the playground, which is installed in Downtown Atlanta’s Woodruff Park. Jeff Santos of Coquitlam, British Columbia, designed the original concept of the playground, having been named winner of the 2010 Playable 10 Contest held in partnership with Bank of America, Georgia Institute of Technology, CAP and the Atlanta Taskforce of Play. Shaped with Atlanta in mind, the playground’s design mimics the letters “ATL,” and features climbing walls, monkey bars and two differently sized slides. The playground’s installation is a part of the larger Woodruff Park Master Plan, which is a detailed vision of Downtown’s most distinctive green space. The Master Plan supports a memorandum of understanding originated in 2007 between the City of Atlanta Department of Parks, Recreation and Cultural Affairs and the Atlanta Downtown Improvement District (ADID).