When Na’Taki Osborne Jelks was 19, her mother was diagnosed with breast cancer after five years spent living in an area in Louisiana known as Cancer Alley. Stretching from Baton Rouge to New Orleans, the corridor is home to more than 150 petrochemical plants and an unusually high number of cancer cases. Her mother survived, but the experience left an impression. “I started connecting those dots in college,” says Jelks, 39. “I wanted to help communities avoid these kinds of environmental exposures.”

She moved to Atlanta in 1993 to attend Spelman College and joined a community of volunteers working to protect Proctor Creek, which is plagued by illegal dumping and pollution. Jelks stayed on when the group banded together with its neighbors to form the West Atlanta Watershed Alliance (WAWA) in 1998 and was elected as WAWA’s board chair in 2010. You can often find Jelks scouring Cascade Springs Nature Preserve for downed trees or leading educational hikes through the Outdoor Activity Center. 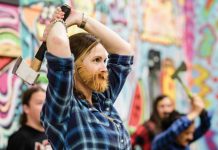