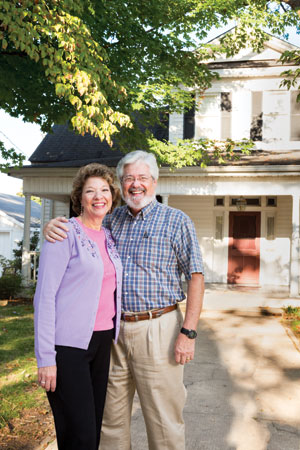 Last spring, Gainesville resident Angela Ivey, a part-time church administrator, was working at home when she noticed a suspicious woman walking around in her driveway. When Angela questioned her, the woman said she was a movie location scout and asked to come inside and take photos. Yeah, right, thought Angela.

Turns out the stranger was legit. For the next few months, various film types visited and crawled all over the Iveys’ house. They were looking for a quaint cottage to serve as Drew Barrymore’s home in the upcoming movie The Family­moon with Adam Sandler, due for release in May. With its gabled dormer roof and front porch swing, Angela and Ed Ivey’s 1921 Craftsman bungalow is nothing if not quaint. After signing a contract with Warner Bros./Happy Madison Productions, the couple Photoshopped Sandler into a photo of themselves and emailed an announcement to their family—on April 1.

Summer theater actors themselves, the Iveys were curious about filmmaking. The “very fair” compensation was also tempting. But what really sold them was the promise of new landscaping. “They had us at sod,” says Angela.
The Iveys lived with friends while crews emptied their house, repainted and furnished most rooms, installed extra lighting, removed doors to accommodate cameras, and, indeed, planted lush fescue and beds of cheerful roses and hydrangeas. The movers photographed drawers and shelves so they could restore everything to its original position. The most radical change was knocking out the wall between the dining room and the kitchen. Ironically, the art director switched the Iveys’ newer, side-by-side refrigerator for an outdated one in their garage. (Our guess is that Barrymore’s character is a financially strapped single mom.)

The subcontractors were highly professional and considerate, say the Iveys, though the process, which took about six weeks, proved daunting. “My emotional response to having people come in and trash my house has been different than I expected,” says Angela. “I don’t really have a problem with it, but it’s a little unsettling.”

The couple also enjoyed being extras in a baseball scene, sitting in bleachers behind Barrymore, and they got to shake hands with the real Sandler. They’re looking forward to spotting familiar props like their toaster oven when the movie’s released. And they’re grateful their neighbors were good sports about trucks jamming the narrow street. Asked if they’d do it again, both Ed and Angela say “in a heartbeat.”