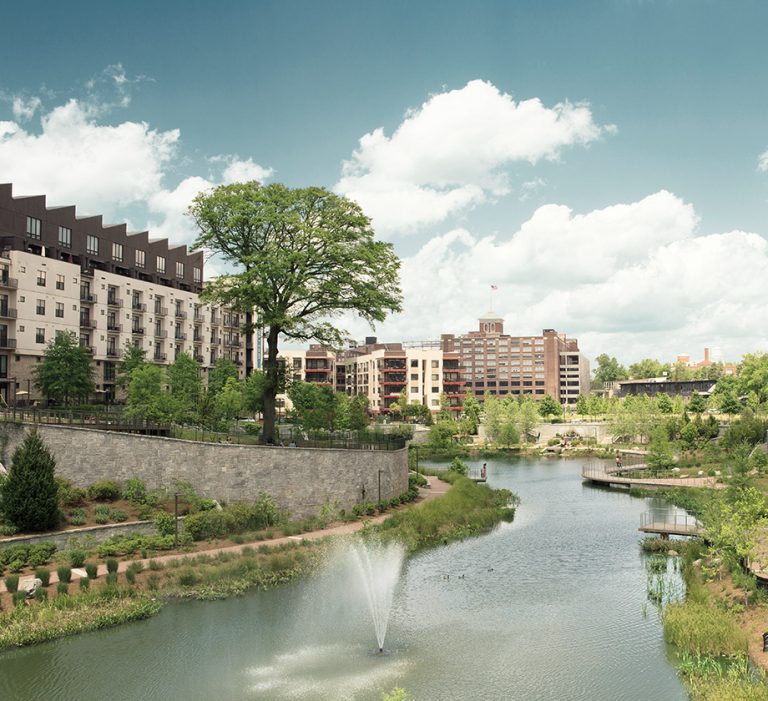 Historic Fourth Ward Park and the Historic Fourth Ward Skatepark
This Old Fourth Ward park is the most dazzling gem so far in the Atlanta BeltLine’s emerald necklace. Dedicated four years ago this month, the park transformed an eyesore of broken asphalt into a popular gathering place, anchored by a two-acre retention pond. There’s no swimming, but you can cool off at the spacious splash pad past the playground. The best pastime at Fourth Ward, though, is people-watching, especially at the nearby skatepark, where you can gape at skateboarders dropping into bowls up to 11 feet deep.
Where to park Surrounding streets Angier Avenue and Willoughby Way.
Can I take MARTA? Grab the Route 2 bus to the corner of Ponce de Leon and Glen Iris or the Route 16 to Glen Iris and Ralph McGill.

Little Nancy Creek Park
Saved from development bulldozers in 2007, this five-acre peaceful refuge is North Buckhead’s first park. The picnic-friendly spot includes a playground designed with input from students at Sarah Smith Elementary School. A 1.2-mile woodsy walking trail is bisected by gently gurgling Little Nancy Creek, which you can cross via a stepping-stone path. There’s also a 21-plot community garden, and construction is underway for a nearby covered pavilion.
Where to park A parking lot inside or street parking at Winall Down Road.
Can I take MARTA? Nope.

Olmsted Linear Parks
Premier landscape architect Frederick Law Olmsted—father of New York’s Central Park—contributed to the design of these six adjoining parks. More than a century later, they’ve been lovingly rehabilitated, a $10 million process completed in 2012. Five of the six segments—Springdale, Virgilee, Oak Grove, Shadyside, and Dellwood—are gently rolling knolls, perfect for jogging, sunbathing, and meditating (just tune out the traffic). But the easternmost segment, Deepdene, is a 22-acre steep-sloping wooded retreat with walkways, a granite and pine log bridge, and—if you look carefully—exposed trolley tracks from the early 1900s.
Where to park Side streets from Clifton Road to Fairview off Ponce de Leon.
Can I take Marta? The Route 2 bus makes several stops along Ponce de Leon, parallel to the parks.

Perkerson Park
Set in the Capitol View neighborhood, this 50-acre Atlanta BeltLine park boasts an 18-hole disc golf course, which offers two levels of play and meanders through a hilly hardwood forest. Other recreation options include six tennis courts, softball and baseball diamonds, a basketball court, a playground and splash pad, and a covered picnic pavilion that you can reserve for birthday parties. For peace and quiet, head to the shaded rocky stream.
Where to park On-site at 770 Deckner Avenue.
Can I take MARTA? Just east of the park, exit the Route 95 bus at Metropolitan Parkway and Claire Drive; on the west side, take the Route 79 to Sylvan Road and Woodbourne Drive.

Washington Park
In the early 1900s, blacks were not welcome in Grant or Piedmont parks. So in 1919 Heman Perry, a local African American developer, donated land to create an integrated park in the historically black Washington Park neighborhood 2.9 miles west of downtown. Today the 20-acre grounds, which bump up against the Atlanta BeltLine, draw a diverse crowd thanks to a popular natatorium, which houses a 25-meter pool with 10 lanes. There’s also a large new playground and a state-of-the-art tennis center with eight courts and stadium seating.
Where to park On-site at 102 Ollie Street
Can I take MARTA? The Ashby rail station is a little more than a quarter mile away.

Whittier Mill Park
In 1895, the Whittier Mills took root on the west side of Atlanta, where they remained in production until 1971. Afterward, the property became neglected and overgrown; most of the brick mill buildings were demolished in 1988. A few years later, though, local homeowners enlisted support to turn it into a greenspace, which was dedicated in 2003. Now, only two remnants of the mill—the brick ruins of the mill tower and the carpentry shed—stand sentry inside the 22-acre park, which hugs the Chattahoochee and connects with the Chattahoochee Trail Park. There are hiking and bike trails along the river, or you can spread a blanket on the wide-open field and adjacent playground. A visit should also include a stroll through the Whittier Mill Village historic district.
Where to park Spad and Wales Avenues, off Bolton Road
Can I take MARTA? Grab the Route 58 bus to Bolton Road and Peyton Road, then walk up Whittier Avenue.

Hide away at these 4 Atlanta secret gardens 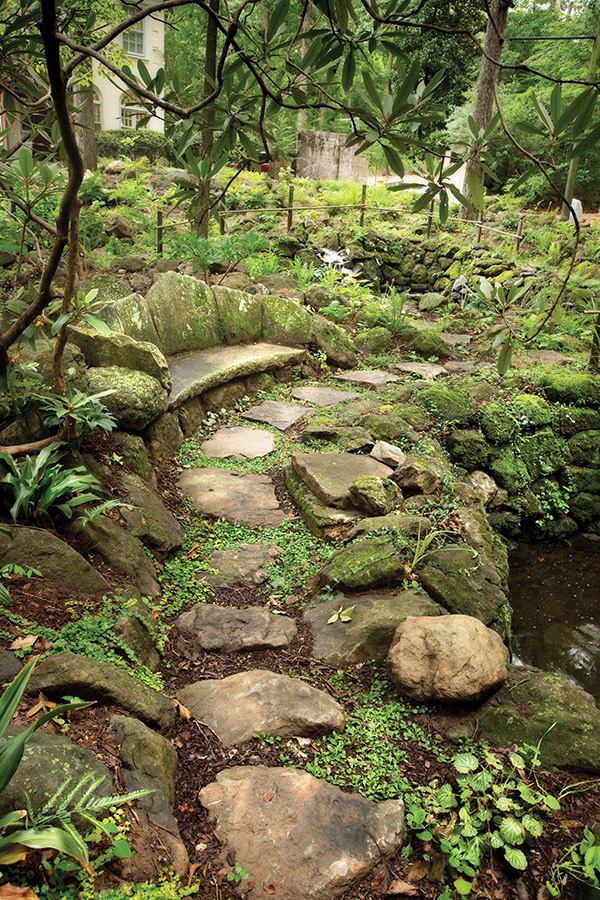 Lake Claire Community Land Trust
At this 1.5-acre urban garden overlooking DeKalb Avenue, find drum circles, saunas, and a folksy amphitheater. The Land Trust dates to 1985, when neighbors bought land that piled up during MARTA’s construction. Since then, hundreds have contributed to a groovy sanctuary they hope will inspire more neighborhood parks. Respectful visitors (especially nonmotorists) are welcome during daylight. Bring grapes to feed “Big Lou,” the resident emu.

Japanese Zen Garden
Grand Hyatt Atlanta in Buckhead
In the midst of the busy intersection at Peachtree and Piedmont is an oasis of calm: the Grand Hyatt Atlanta’s Japanese Zen Garden, where you can hide from the bustle for meditation, communing with nature, or a bit of navel-gazing. The traditional Japanese design includes a waterfall, pond, and garden with rocks and plants native to Georgia. Technically, you’re supposed to be a hotel guest to Zen out, but sipping sake at the bar should get you enough karma credit to wander through. 3300 Peachtree Road

Can you match these 8 curated curiosities to their Atlanta museums? 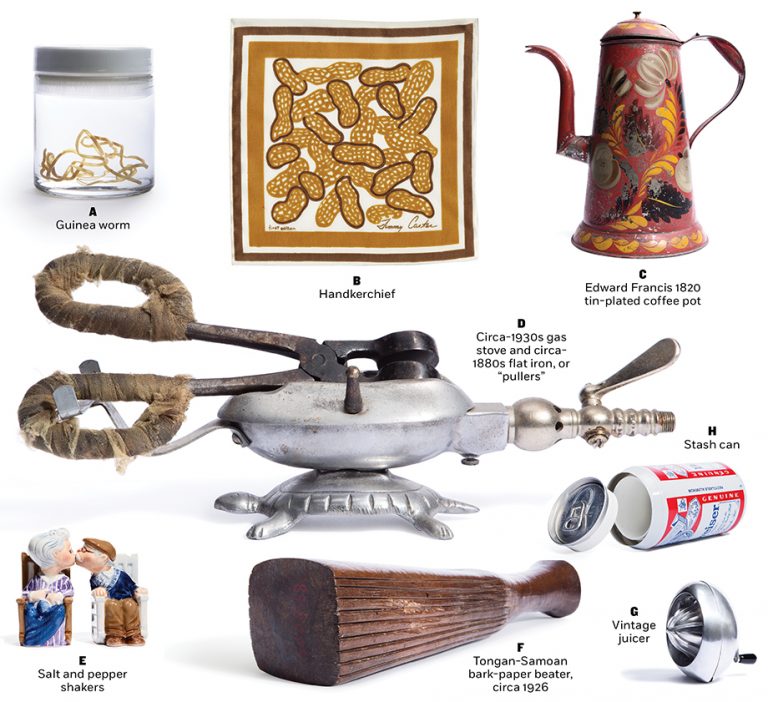 1 David J. Sencer Museum at the Centers for Disease Control and Prevention
This may be the only museum in Atlanta requiring a vehicle inspection upon entry, but the security somehow heightens the experience. Named for the CDC’s longest-serving director, the gallery traces the homegrown agency’s history and its role in waging war against malaria, smallpox, HIV, Legionnaires’ disease, and other global maladies. Try on a lab safety suit, see an exhibit on venereal diseases, and watch footage of Guinea worm extractions—you’ll be thankful for the hand sanitizer near the exits. Free, 1600 Clifton Road

2 Collectible & Antique Chair Gallery
Two decades ago, a nurse named Barbara H. Hartsfield went shopping for a doll and chair and stumbled upon a passion for pint-sized seating. In 2008, Guinness World Records certified her collection the largest, at 3,000. The next year, Hartsfield opened her gallery in a quaint antebellum home in Stone Mountain Village. The sorghum-sweet sexagenarian’s tours feature chairs made of toothpicks and clothespins, chairs in bottles, and chairs that function as bird feeders. $5,994 Main Street, Stone Mountain Village

3 The Robert C. Williams Museum of Papermaking
This trove of insights into writing material—from ancient clay tablets to high-tech machinery—is located in the Renewable Bioproducts Institute at Georgia Tech. You’ll find tools, machines, manuscripts, elegant watermarks, and even displays on paper’s environmental impact. A tiny gift shop offers origami papers and elephant dung turned into baby “paper” elephants. You can also learn how to make and marble paper in the many workshops. Suggested donation $3, 500 10th Street

4 Georgia Capitol Museum
The State Capitol actually houses creatures sprouting two heads—and they’re not lawmakers. A two-headed calf and snake are among the souvenirs that have been kept in the museum since the 1890s. Also find campaign buttons and flags, maps, postcards, tie tacks, and state symbols from fossil (shark’s tooth) to veggie (Vidalia onions). Take in the displays on turpentine production and peach packing, or go on a tour—you might even learn something about the legislative process. Free, 206 State Capitol

5 National Museum of Decorative Painting
This little brick building on the Westside houses the national museum for the niche art of hand-painted platters, boxes, and other decorative objects from around the world. An exhibit of Russian trays currently takes up most of the gallery, but the entire collection can be viewed in the stacks. Some of it is historical, some contemporary, some kitschy (Santas, baby animals), some fine art. Our favorites are the vibrant, ’40s-era cupboards by folk artist Peter Hunt. Free, 1406 Woodmont Lane

6 Waffle House Museum
Located in the Avondale Estates building where the first Waffle House opened in 1955, the shrine to the omnipresent franchise features a circa-1950s diner, replicated right down to the signs for 20-cent hash browns. One side is lined with displays of old uniforms, flatware, and photos dedicated to WaHo’s ascent to cult status. Call 48 hours ahead or check Facebook for quarterly openings. Free, 2719 East College Avenue, Decatur, 770-326-7086

7 Crime Lab Museum
Among the fingerprint kits, autopsy saw, and DNA analysis at the Georgia Bureau of Investigation’s Decatur headquarters is a jar containing a dead monkey. In 1953, three men rendered the beast hairless, painted it green, and left it on a rural Georgia road to prank cops. But even creepier than the “Monkey from Mars” is the forensic display: an ultraviolet light box containing a napkin beneath a sign that asks, “Can you detect the seminal fluid stain?” Free, 3121 Panthersville Road, Decatur; to visit, call Bradley Martin at 404-270-8349

8 Madame C.J. Walker Museum
Walker was an African American entrepreneur in the early 1900s who launched a beauty shop empire. This shop, just off Auburn Avenue, opened in 1950. Ricci de Forest moved his salon here in 2004 and acts as curator of the artifacts—vintage hair combs, curling irons, hair dryers—left by the previous tenant. He’s also digitally resurrecting the first black-owned radio station in America, WERD, housed upstairs from 1949 to 1968. More than 10,000 vinyls are on display. $5, 54 Hilliard Street