FEATURES
Single in the City
Forty-three bars, clubs, and events that make Atlanta a great place to meet your match
PLUS our cover single, The Bachelorette‘s DeAnna Pappas, and notes from the field: a night out with a pickup artist; the search for a sugar daddy; and what happens when you follow the advice of dating experts
> ONLINE ONLY: “Flirt Boot Camp,” a diary

Hoochie Koo!
In the swinging seventies, no place swung like Riverbend—Atlanta’s most notorious singles complex. Fifteen former revelers reminisce about wild times by the Chattahoochee. Interviews by Charles Bethea

The Debtor
Darren Lumar whirled into Atlanta, married James Brown’s daughter, made a lot of promises, lived in one grand home after another, and died November 6, 2008, after a cigarette-smoking hit man strolled into his garage and filled him with bullets. The killer is still loose. The police have an unusual problem with their investigation: There are too many possible suspects. By Thomas Lake
> ONLINE ONLY: Reporter’s notes

FEATURES
Best of Atlanta
Our yearly rundown of the city’s finest places to dine, play, shop, and thrive. PLUS Hall-of-famers and neighborhood favorites

Applaud
Eight stories of charity and courage that remind us the best parts of Atlanta are the people among us.

Believe!
In a sport ruled by women half a foot taller, Melanie Oudin leveraged a tireless work ethic and a staggering intensity to surprise everyone at this year’s U.S. Open—everyone, that is, except herself.
By Elizabeth Westby Florio

COLUMNS
Charles at large The Pink Pig and other trains
Thomas Lake A boy, his mother, and a swag attack
Hollis Gillespie Social networking can be so isolating
Editor’s Note 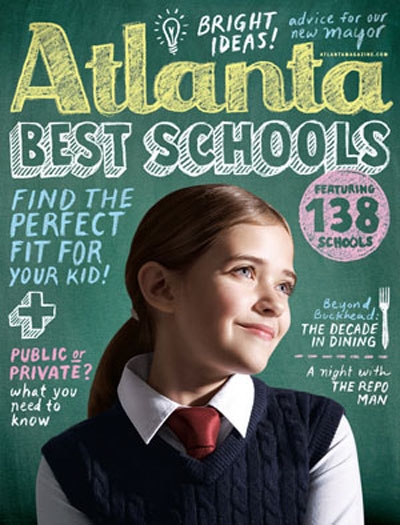 FEATURES
School Guide
Our yearly compilation includes the metro area’s most comprehensive school profiles, both public and private.
PLUS FAQs when considering your options
By Mary Jo DiLonardo

What’s the Big Idea?
Cover up the Connector. Turn vacant lots into gardens. Demolish Underground. Build the BeltLine. Synchronize the traffic lights. Atlantans have plenty of suggestions for our new mayor.
PLUS A panel of local leaders talk frankly about the city
Compiled by Steve Fennessy, Elizabeth Westby Florio, and Jackson Reeves

Like a Thief in the Night
The repo man does his best work alone in the dark. No good can come of a confrontation.
By Thomas Lake


Charles at large Coyotes invade and Ticket Scalping 101
Thomas Lake Philips Arena gets a midnight makeover
> GALLERY: From hockey to hoops, in photos
Hollis Gillespie No man is on my island
Editor’s Note 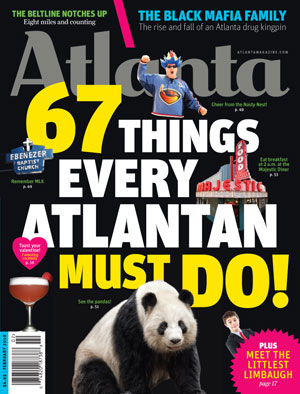 FEATURES
67 Things Every Atlantan Must Do
When’s the last time you went to the opera? Or climbed Stone Mountain (in the dark)? Or toured Auburn Avenue with Andrew Young? Here are sixty-seven must-dos to reintroduce you to your city.

The Black Mafia Family
Mara Shalhoup chronicles the rise and fall of Atlanta drug kingpin. An excerpt from her new book.

COLUMNS
Charles at Large The BeltLine and airport parking 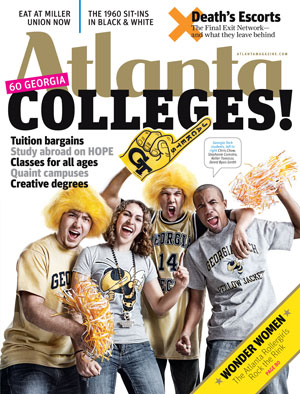 FEATURES
2010 Georgia College Guide
The most comprehensive annual guide to the state’s public and private colleges and universities.
> Browse our interactive directory of schools

Atlanta Student Movement
Fifty years ago this month, students at the Atlanta University Center published a civil rights manifesto and changed the country.
By Rebecca Burns
> Online only: Documents from the archives of Auburn Avenue Research Library
> Online only: Video interviews from a new exhibit at the Atlanta History Center

Wonder Women
Merrily the Atlanta Rollergirls roll along, knocking the socks off each other, their fans, and the idea that they’re just a campy group of retro roller vixens.
By Hollis Gillespie

Final Exit
John Celmer secretly reached out to a controversial group that advises the sick and suffering on how to end their own lives. The Final Exit Network says it provides a compassionate service, but are they breaking the law?
By Charles Bethea 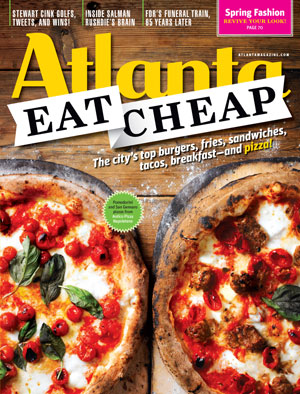 FEATURES
The Champions of Cheap Eats
We searched the metro area, visiting beloved standards and promising newcomers, to compile our favorites—a blend of true bargains and more upscale renditions that are absolutely worth the price.
> Succulent burgers and fantastic fries
> The best pizza deals, including the metro area’s top four
> A world tour of sandwiches
> Transcendent tacos and breakfast—with a side of pho
Edited by Bill Addison

The Long Goodbye
Sixty-five years after FDR’s sudden death in Warm Springs, a new book by Robert Klara reveals the intrigue and drama aboard his funeral train.

Q&A: Stewart Cink
The thirty-six-year-old golf pro talks about his unlikely British Open win, tweeting, and the Bible study group that keeps him grounded when he’s on the road.
Interview by Steve Fennessy

Urban Renewal
Spring’s most verdant dresses light up the ruins of a century-old cotton gin factory on Atlanta’s Westside.
Photographs by Alex Martinez

Charles at Large Why no dogs at the Dogwood Festival?
Thomas Lake Inside the jury room at a Spelman murder trial
Hollis Gillespie I found my hometown pride at Sundance
Editor’s Note

FEATURES
Real Estate 2010
Navigate the current real estate environment with our guide. Including:
> What experts are saying about the recovery
> How to sell in this market
> What it’s like to be under water on your mortgage
> What Georgia’s new property tax law might mean for you
> The picture according to neighborhood and city
Edited by Amanda Heckert

The Streets of Buckhead
After three years, Ben Carter’s dream to bring Rodeo Drive to Peachtree Road is still up in the air.
By Thomas Lake

ARTS & ENTERTAINMENT
In concert Five concert series to help you ease into summer
Best bets What to do this month
Party page Rich Eldredge on the month’s social happenings
Arts Introducing the Rail Arts District
Teresa Weaver on books A Q&A with Emily Giffin, plus her new book, Heart of the Matter
> ONLINE EXTRA: Full interview with Giffin

FEATURES
Top Doctors 2010
We asked hundreds of metro-area doctors to name their most respected colleagues. PLUS:
> Five tales of patient survival and medical wizardry
> Top-performing hospitals according to the nation’s leading independent ratings firm

The Golden Boy and the Invisible Army
When the H1N1 swine flu virus boiled up out of Mexico last year, the CDC became the epicenter of a worldwide struggle to stop its deadly march. Twenty miles north, at a brick house in Johns Creek, the virus found a perfect host.
By Thomas Lake 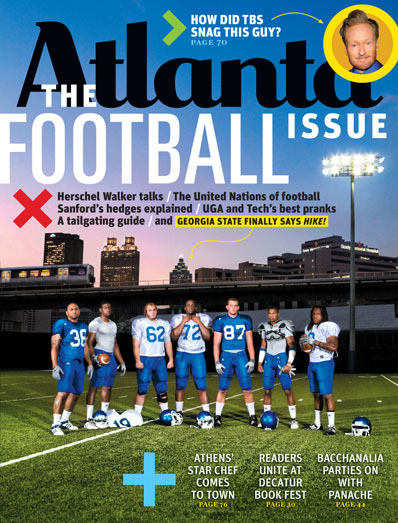 FEATURES
Football 2010
Get in the game this fall at your home team’s favorite bar, learn how to tailgate in style, and hear gridiron legend Herschel Walker and five others talk about the sport. PLUS:
> Cross Keys, the United Nations of high school football
> The Georgia Football Player, a study in five stages
> Best UGA-Tech pranks
> Find a rec league that fits your style

Super Station!
When TBS snagged Conan O’Brien, everyone was shocked. Everyone, that is, but TBS.
By Amanda Heckert

FEATURES
The BBQ Guide
Who smokes the best ribs, pulls the best pork, or brews the best Brunswick stew? Our dining critic went on an epic quest to find out. PLUS:
> Jim Auchmutey ponders Georgia’s place in Southern barbecue
> Pitmaster Sam Huff imparts the secrets of a barbecue guru
> Two smokin’ hot hometown grills, the Primo and the Big Green Egg
> Our dining critic’s top five
> Top sides and a gallery of standout pitmasters

Charles at large Will Cobb ever get MARTA?
Tom Lake Fighting for Peachtree Pine homeless shelter