All work—and all play—at UGA 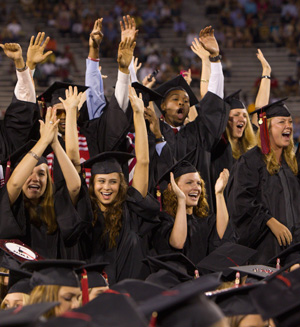 The mantra “work hard, play hard” has a new meaning for students at the University of Georgia. Known for recurring appearances in the top tier of “Party Schools” lists, UGA hasn’t exactly had a reputation for being academically grueling—despite consistently being named a top public university.

That might change now that College Prowler has named UGA the “Most Intense” university in America, meaning its students study and party equally hard. College Prowler, which surveys students nationwide, reached this verdict after getting input from students at academically ranked schools known for big party scenes. (Its student surveys name UGA number one for “most vibrant social scene.”)

“It makes sense that that would be a description of UGA,” says Nadine Najjar, a junior honors student and biology and psych double major. “There are so many academic opportunities,” she notes, adding, “Athens is a really great town with a lot of fun things to do.” The data backs up her assessment. The average GPA of this year’s incoming freshman class is 3.8, with 97 percent receiving the HOPE Scholarship. On the other hand, downtown Athens has more than forty bars and nightclubs in just twenty square blocks.

Why Tech is the nation’s best buy 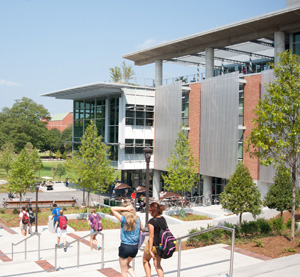 Step aside, Ivy League: Prestige is one thing, but when it comes to balancing a paycheck and student loans, the Georgia Institute of Technology has you beat. SmartMoney ranked Georgia Tech the country’s “Best Value,” analyzing starting salaries, paychecks three years after finishing school, and average total tuition cost to determine where graduates get the most bang for their tuition bucks.

The blog NerdWallet also crunched numbers and confirmed SmartMoney’s analysis, reporting that of ten schools whose graduates earn top salaries, Tech is the only public school.

The median annual salary for recent Tech graduates is $59,000, compared with $50,700 for Harvard grads and $48,900 for Yalies, while the average annual tuition for out-of-state students at Tech is just $26,000, compared with $44,000 at the other top-earning schools. For Georgia residents, tuition is less than $8,000, and most Tech students qualify for HOPE.

Although Georgia Tech is mainly known for its engineering programs, students from other departments find success as well. “Tech is a really good school even if you’re not a technology or engineering major,” says An Do, a fourth-year psychology major at Tech. She believes the accessible career centers, career fairs, and visiting professors from organizations like the CDC and Marcus Autism Center add to its overall value.

“Regardless of what your major is, the different departments really help you get what you need,” she says.