Game changer: What the College Football Playoff means for the SEC title game and the Peach Bowl 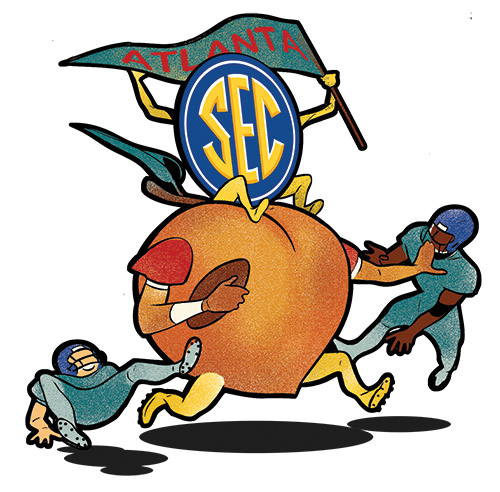 Officially, the College Football Playoff is a new thing. So perhaps we should forgive those who fail to realize Atlanta invented the format years ago—with a little contest called the SEC Championship.

Three times during the conference’s seven-year national title domination, that SEC title game in the Georgia Dome pitted two of the country’s top three teams against each other, essentially serving the role of one of the bowl games in the “new” format. In 2008 and 2009, Alabama and Florida were the country’s top-ranked teams heading into the SEC game. And in 2012, Alabama and Georgia battled for the right to demolish number one Notre Dame. Nine of the last 11 teams to win in Atlanta in December went on to play for national titles. That’s as close to a semifinal as a sport without a semifinal ever had.

So the new postseason setup robs that game in the Dome of a little shine; the SEC’s champion will, at best, be just one of four playoff teams. And it’s probable that the SEC occasionally will have a playoff team that didn’t even win the Georgia Dome showdown.

But there’s an upside for Atlanta. The playoff structure rotates semifinals among six New Year’s bowls, one of which is the Chick-fil-A Peach Bowl (and yes, after a few years as a chicken sandwich branding exercise, the event once again has peach in its name). This will mean that our city hosts two of the eight most important college football games every season. You can also expect the ATL to host the national championship once a decade or so; the city already submitted a bid to host the 2018 game in the new Falcons arena. College football’s spotlight on Atlanta isn’t going away. Indeed, it’s only glowing brighter.

On the calendar: The Chick-fil-A Peach Bowl will be held on December 31.

Based in Atlanta, Kirk is college football editor for SB Nation.

Atlanta is a sports town: Just look at our passion for college football 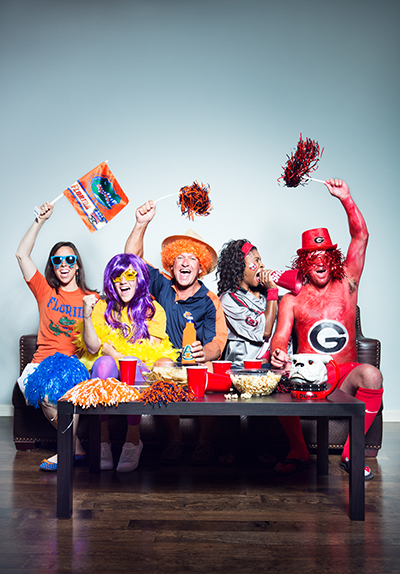 While our reputation as supporters of
professional teams is in dispute, there’s no denying Atlanta is the capital of college football. Why? The question is easy to answer.

History (the simple kind).
The Deep South didn’t have a long-term presence in a major pro league until the 1960s, when the Braves moved to town and the NFL granted us the Falcons. The closest options were in St. Louis or Washington, D.C. Southerners adapted by treating college programs like pro teams. (It’s no surprise that the first paid college coach was Georgia Tech’s John Heisman.) While New Yorkers had Yankee Stadium, Tech’s Grant Field was the place to be seen in Atlanta in the 1940s and 1950s.

History (the complex kind).
The South had a rough . . . few centuries or so. Other than producing superior food and music and manners, our people didn’t ring up very many wins against other regions—until Alabama won the 1926 Rose Bowl as the first Southern team to be invited to college football’s only bowl game.

We’re good at it.
It’s one part passion and one part (bacon-enhanced) produce. You try raising 310-pound defensive tackles on a California diet. It just doesn’t work. That’s why SEC teams overpower teams from elsewhere. Georgia is one of football’s most talent-rich states, second only to Florida in sending high school players to Division I college programs. Atlanta is the recruiting El Dorado; Big Ten teams set up shop here just to spend time with our prep stars.

Atlanta’s the heart of everything Southern.
Listen to the head coaches of every team in college football’s best conference before the season starts: They all say they “want to get to Atlanta” (for the SEC Championship). As the Southeast’s hub, Atlanta stands as the biggest post-grad destination for alumni from most ACC and SEC schools, and there’s a horde of Big Ten alums here, too. Our melting pot gets mocked by other Southern cities for quartering fans of the Cowboys, Celtics, and Red Sox, but that welcoming quality actually boosts our college fandom profile. In late August, look down your street: Odds are good you’ll see flags, stickers, and shirts celebrating Auburn, Tennessee, Florida, Ohio State, Clemson, and especially the Dawgs. You can’t get that spirit anywhere else.

This article originally appeared in our August 2014 issue under the headline “This Is a Sports Town.”