Must-try dish: The unorthodox burrata at ONE Midtown Kitchen 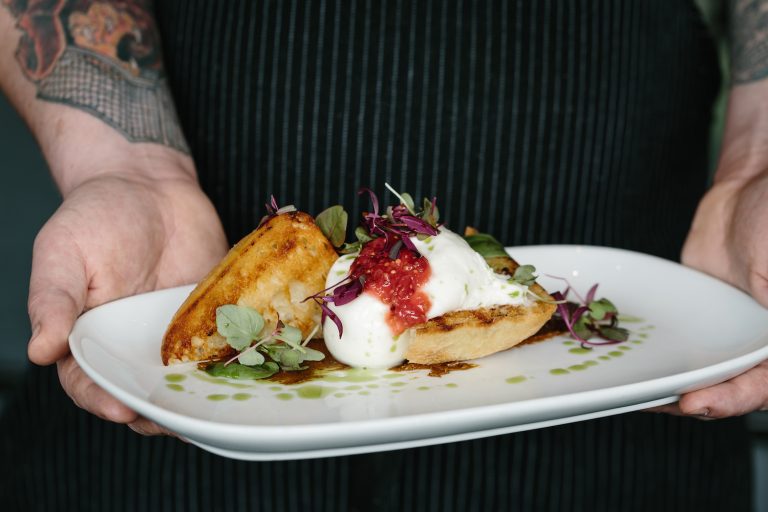 Concentrics’ ONE Midtown Kitchen has served as a launching pad for many notable chefs, including Richard Blais, Drew Van Leuven, Nick Oltarsh, and Eli Kirshtein. And if the new menu is any indication, current co-chefs Matt Weinstein and Christopher Maher are poised for similar success. The duo draws from many influences and countries in ONE’s menu, where you can find crispy pork belly paired with Mexican ingredients a la carnitas or an unparalleled (and unorthodox) burrata dish. Weinstein credits both himself and Maher for the burrata, which he says represents both of them as chefs.

Although the dish looks relatively straightforward when it arrives, the flavors are anything but. The firm burrata is placed upon a thick schmear of pistachio butter, draped with a tart plum and peach mostarda, and finished with bright green droplets of sorrel oil and sorrel, bull’s blood, and arugula microgreens from Ashland Farms. Thick slabs of grilled ciabatta serve as a vessel for a combination of flavors so befuddlingly awesome it almost reminded me of a savory fluffernutter as the creamy burrata center mixes with the decadent pistachio butter. The mostarda keeps all of the richness in check, while the sorrel oil and microgreens lend brightness to this indulgent dish. Pair it with the Amaro Cup, a cocktail made with gin, Amaro, lemon, simple syrup, ginger, and beet juice for a lively start to your meal at this Midtown mainstay. 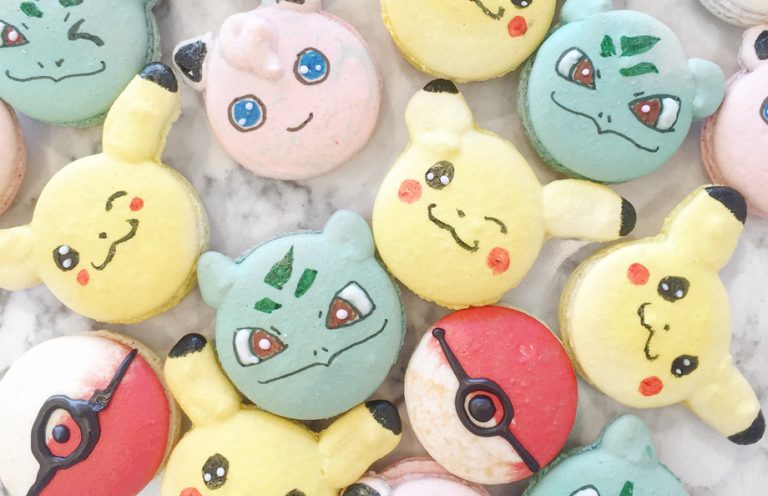 Eating during Dragon Con can get monotonous when you’re bouncing from one slice of Papa John’s pizza to the next. This is 2016; you don’t have to eat poorly just because you are at a festival. Atlanta bars, restaurants, hotels, and food trucks are letting loose with some cool geek-themed food and drink in the spirit of the Con, which celebrates its 30th anniversary this year. So while you are hanging out with Furiosa, Deadpool, Rey, and Jon Snow, treat yourself to some tongue-in-cheek specials for lunch or, maybe, a second breakfast.

Mac Lab Bakery
Get up before panels start and take a trip to this macaron-centric bakery in Duluth, which has been filling their Instagram with these Pokémon-themed macarons that will make you squeal with delight of their cuteness. The hand-painted macarons are mostly filled with jam like guava and raspberry. We’ve spotted a Pikachu and Jigglypuff, and others will certainly pop up over the weekend.

Twenty-Two Storys at The Hyatt Regency
At the Hyatt Regency, which, along with the Marriott Marquis, is Dragon Con party central, Twenty-Two Storys is serving up fun fantasy-themed dishes. Feast on turkey legs or order the King Slayer, a grass-fed burger topped with smoked beef brisket, Pine Street Market bacon, a fried egg, and bourbon BBQ sauce on an onion roll. They will once again offer their self-proclaimed “famous VooDoo bucket,” a 22-ounce drink packed with various rums, fresh fruit juice and “other special ingredients.” If you need a little hair of the dog after late-night dance parties, four specialty drinks will be served each morning with names like the Dragon’s Breath, STARK Contrast, Dragon Lady Bloody Marys, and Mother of Dragon Mimosas.

Food trucks at Dragon Con 2016
Sweet Auburn Barbecue and Gezzos will have food trucks parked at the Sheraton, where the main registration for the convention is located. Sweet Auburn will serve barbecue standards as well as a “Dragon Bowl,” something owner Howard Hsu says is basically the barbecue sundae you want to eat late at night. A bed of mac and cheese is covered with pulled pork, pork rinds, and romesco sauce. Hsu promises the dish is enough to satiate two Stormtroopers. The trucks will be parked from 11 a.m. to midnight September 1 through September 4.

Starbucks at Peachtree Center
Everyone needs rocket fuel to keep their energy up between panel hopping and partying. Head to Starbucks for standard drinks and specials like the Pokéball Frappuccino, a concoction that is half vanilla bean Frappuccino and half strawberries and cream Frappuccino, topped with strawberry whipped cream. It takes two different pitchers to make, only comes Venti-sized, and is purposely intensely sweet because, as everyone knows, sugar is magic.

Big Kahuna
Big Kahuna is going, well, big as they always do with a drink menu full of Dragon Con-themed concoctions. Look for the bright blue Liquid Smurf, Lord Vader’s Force Choke, Mighty Morphin Mules, Falcon Punch, Silver Surfer Margarita, and the Ghostbuster. The restaurant will also have events like costume parties throughout the weekend, hosted by the Hip-Hop Trooper. They also offer free parking all weekend long.

Venkman’s
The popular music venue/restaurant located in the old NuGrape soda factory might not be in the middle of the action, but it is getting on the Dragon Con fun with a special drink paying homage to the Ghostbusters (the restaurant is named after Bill Murray’s character in the film, Peter Venkman, Ph.D). Enter the Ecto-cooler, a frozen slushy made with fresh citrus, vodka, simple syrup, and chlorophyll.

In this Midtown cottage, layered fabrics and Asian finds create a laid-back vibe