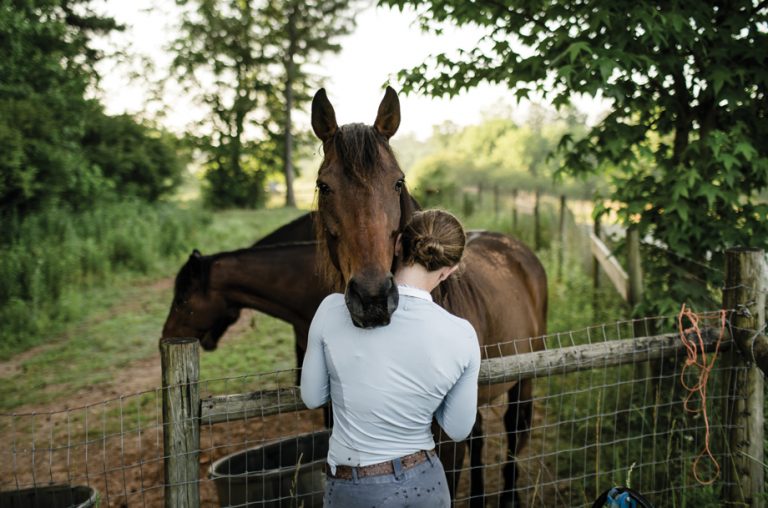 On a hot and hazy North Georgia afternoon, Elisa Wallace is in a dusty arena working with two horses she calls her “boys.” Rune, the larger of the pair, seems a rambunctious younger brother to Fledge, a quiet presence whose stillness draws you in.

With an almost imperceptible signal from Wallace, Fledge lies down on his side—the ultimate sign of trust from a horse—and Rune sits next to him with an ease that belies the training it required. Then Wallace climbs up onto Fledge’s side as she converses with Rune, who looks down earnestly at her, nodding attentively, like an immense, gentle dog playing with a tiny girl.

Since Wallace, 34, is a veteran trainer and world-class equestrian, it seems only natural that she’s able to get horses to follow her commands. That is until you consider that unlike many of the horses Wallace works with, Fledge and Rune didn’t come from a breeding farm with a documented lineage. Instead they’re mustangs who were running wild across the western plains not long before she bought them.

For Wallace, shortlisted this year for the 2016 Olympic equestrian team, working with mustangs is a labor of love, something she does to promote the horses’ plight. There are more than 45,000 wild mustangs—sometimes called “range rats” and considered pests by ranchers—in federal holding facilities. Another 67,000 or more are living feral on the range, Wallace says.

For more than a decade, the Georgia native has competed internationally at the highest levels of eventing, which tests three demanding disciplines of horsemanship over the course of three days: jumping, a cross-country obstacle course, and dressage, in which a horse must move with incredible precision both from memory and in response to the most subtle signals from the rider.

Eight years ago, Wallace suffered a setback at the height of her success. It’s through her work with mustangs that Wallace has gained the sponsorship support that has revived her riding career.

Wallace was first considered for an Olympic slot in 2008, but she has harbored Olympic dreams since she was a young girl growing up in Newnan and Alpharetta. She began riding at two and has competed since she was four, encouraged by her parents. Wallace’s father, Rick, is an expert rider who barely missed qualifying for the 1992 Olympics in Barcelona.

Wallace, who makes her living as a trainer, works at an idyllic farm owned by one of her sponsors near Jasper, where she lives in an apartment above the barn with her husband, Timothy, and their three dogs. Sponsors and grants are vital in a sport where a top horse can cost upwards of $100,000, and the price of transporting a horse for overseas competition starts around $15,000.

But in the summer of 2000, at the age of 18, Wallace didn’t have sponsors. She couldn’t afford a professionally trained “fancy horse,” as she calls it, and even an untrained warmblood, one of the well-regarded breeds in the sport, could cost as much as $20,000. So Wallace took a chance on Jackson, a thoroughbred yearling she found on the internet for $700.

She and her mother drove 14 hours to Kansas to fetch Jackson, despite warnings that thoroughbreds can be injury-prone and headstrong. “He was a natural,” says Wallace, “not like your normal green horse that has ups and downs and goes backward sometimes. He was like a whiz kid at everything.”

Within a few years, Wallace and Jackson were top-level competitors in the eventing world. By fall 2006 she had landed a spot on the so-called “long-list” for the 2008 Olympic team. At that point Jackson was worth $150,000 by conservative estimates.

Then, in 2007, just two weeks before the prestigious Blenheim Palace International Horse Trials in England, Jackson hurt his leg. The injury ended his competitive career and effectively derailed Wallace’s Olympic hopes. She kept Jackson with her and continued to train horses for others as she tried to figure out her next move in her own riding career.

In 2012 a friend persuaded her to enter the “Extreme Mustang Makeover,” a competition sponsored by the Mustang Heritage Foundation in which participants have four months to train a wild mustang. Wallace was paired with Fledge and fell in love. After winning the competition, she bought him and then Rune two years later and has made it part of her mission, through demonstrations and speaking engagements, to advocate for these forgotten creatures.

Wallace has discovered she has an affinity for difficult horses. She likes to figure them out, find out what makes them tick.

“I like underdogs,” she says. “So thoroughbreds and mustangs coincide because they tend to be underdogs.”

When Wallace finally got back to Blenheim last year, it was with Johnny, who wasn’t a $700 horse she found on the internet. He was a proven $150,000 eventing horse. Wallace credits her father for helping connect her with Johnny. But she also credits Fledge. After Jackson’s injury, it was in large part Wallace’s work with Fledge and other mustangs that attracted the attention of sponsors looking for a rider to take their horse to top-tier events.

In June, Wallace was named as an alternate to compete with Johnny at the 2016 Olympic Games in Rio.

“It’s funny to think how that little mustang essentially changed my life,” she says. “He really set things in motion.”