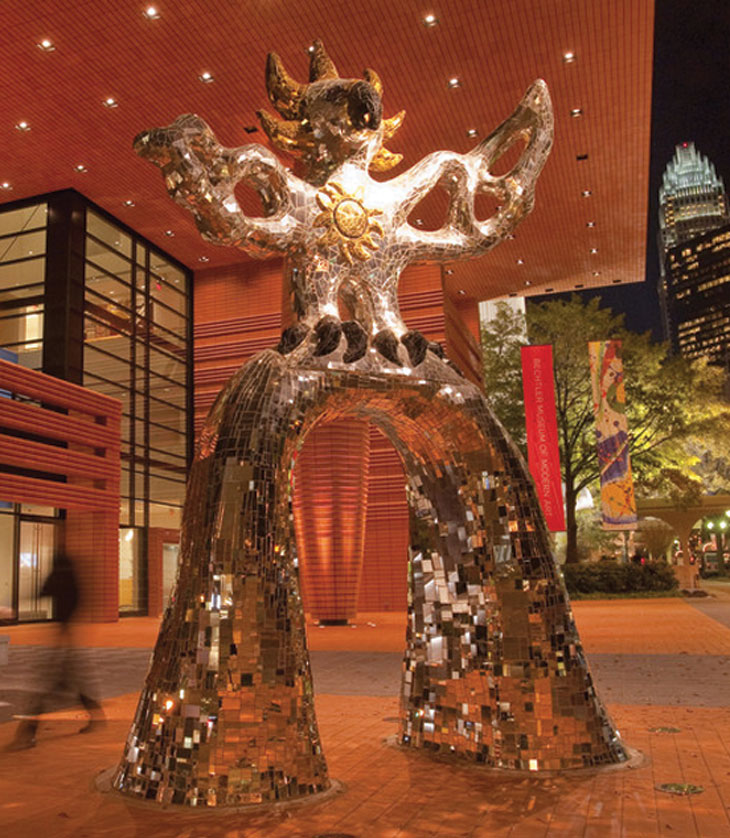 As I sat on the outdoor patio of the restaurant Halcyon, watching dusk settle over Charlotte’s glittering uptown, sipping a cocktail made from local moonshine, oolong tea, chai, and tamarind, I savored the challenge of writing about my adopted city.

Below my second-story perch, a just-married couple were getting their picture taken beneath Niki de Saint Phalle’s Firebird, a seventeen-foot-tall sculpture covered in thousands of tiny mirrors. Firebird was installed in late 2009 in front of the Bechtler Museum of Modern Art, a cantilevered jewel box designed by Swiss architect Mario Botta that opened two months later. The sculpture was an immediate icon and the exclamation point of a last gasp of breathtaking growth, before the financial crisis brought banking center Charlotte to its knees. Maybe it was the moonshine, but watching the couple start their new life called to mind Charlotte’s reboot since that week in 2008 when we lost Wachovia and Bank of America went on life support.

Turns out it hardly mattered. After years of looking outward for inspiration and validation, Charlotte finally began to take care of its own. The result is a New South metropolis full of chef-driven restaurants, public art, craft breweries, and vibrant neighborhoods. This fall Charlotte will host the Democratic National Convention. It’s our Olympic moment.

Which makes it a perfect time for Atlantans to plan a trip up I-85. Make uptown—that’s what we call our downtown, because it sounds classier—your home base. The 700-room Westin Charlotte, designed by Atlanta’s John Portman, is located two blocks each from Levine Center for the Arts, the NASCAR Hall of Fame, and Bank of America Stadium. The latter is where Cam Newton will temporarily cede the spotlight to Barack Obama on September 4.

Levine Center includes Firebird, three art museums, and a theater. If you missed it in Atlanta, catch Tavis Smiley’s America I Am exhibit at The Harvey B. Gantt Center for African-American Arts + Culture. Highlights at the Mint Museum Uptown include Madeleine Albright’s pins (through September 23) and work by native son Romare Bearden.

On the north end of uptown is Levine Museum of the New South. The New York Times fave offers an unvarnished view of the post–Civil War South. Your kids will love trying on hats at the Belk department store and climbing into the barber’s chair.

After a day of culture, nourishment is in order. Halcyon and Harvest Moon Grille are farm-to-fork favorites, or try the hot new Spanish tapas joint Malabar.

If you want to feel like a local, head to Montford Drive. This unassuming street, about a ten-minute drive from uptown, hosts a collection of neighborhood bars and restaurants. Brothers Bruce and Kerry Moffet man the kitchen at Good Food on Montford, a delightful small-plates bistro whose name is an understatement. Order the steamed bun with five-spiced pork belly. After dinner, stroll across the street to the area’s newest hot spot, 10 Park Lanes. Four buddies recently remade this vintage bowling alley into a hip gathering place, with a full lineup of local craft beers and, yes, twelve moonshine taps. Because while Charlotte may be dressing up for company come September, we haven’t forgotten our roots.