Since 2009, when they split their Sam and Dave’s BBQ empire that reset the bar for metro-area barbecue, Sam Huff and David Poe have been compared constantly by ’cue aficionados. Huff took the original East Cobb location; Poe claimed the space on the other side of Marietta that housed Sam and Dave’s BBQ-2. Both display barbecue competition trophies to bring some bling to otherwise dowdy strip mall storefronts. They’ve each tweaked recipes, but their pulled pork, pulled chicken, beef brisket, and baby back ribs taste mighty similar (though Poe also offers the larger spareribs, and I prefer the way their tender-firm meat absorbs the hickory and oak smoke). I’ve been to Huff’s and Poe’s restaurants twice recently, for lunch and dinner. Both times, Poe’s efforts took the lead by a nose (or snout?). The texture of the pulled pork was a tad more luxurious, the taste of the ribs a little fresher. And I admire Poe’s sense of humor: To my knowledge, he was the first locally to pour Brunswick stew over David Roberts’s mac and cheese recipe and dub it “redneck lasagna.” Pair it with the coleslaw gussied up with pineapple and poppy seeds. 660 Whitlock Avenue, Marietta, 770-792-2272, davepoes.com 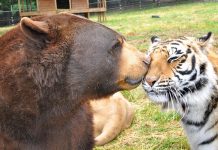 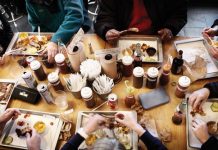 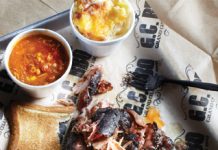