Peanut Butter and Fried Bananas
The Vortex
A skyscraper of bacon, a mound of fried bananas, and a dollop of PB add up to Elvis’s favorite sandwich. The toppings are so dangerous, the Vortex cards at the door. Multiple locations Bibimbap
Milano Bakery & Cafe
With pickled carrots and cucumbers, fistfuls of lettuce, and a fried egg, it’s as much a vegetable as it is a burger. 5268 Buford Highway

Fried Chicken
Burger Joy
It’s the burger you order at 2 a.m. after a night out. Fun fact: Joy delivers until 2:30 a.m. 371 Boulevard 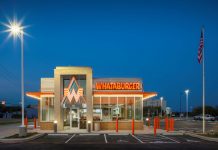