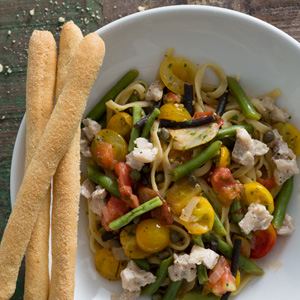 In 2008 La Pietra Cucina opened and introduced Atlanta to the glories of Bruce Logue’s pastas. His mix of Mario Batali bravado (Logue worked as a sous chef at the big guy’s Babbo in Manhattan) and Cal-Ital seasonality merged on the menu, which offered squid-ink spaghetti with shrimp and spicy Calabrese sausage alongside tagliatelle, golden from egg yolks, nestling wild mushrooms and ramps. Logue’s progressive style never quite gelled with La Pietra’s leaden interior, though. His new home, in an angular converted bungalow on the edge of Inman Park, far better suits his fringe culinary personality. (The name, by the way, is a portmanteau of sorts for the Italian phrase in bocca al lupo, or “in the wolf’s mouth,” an expression of good luck similar to “break a leg.”) He plies the old signatures—including his silky-as-ever tagliatelle, pictured on the cover—as well as new seductions like white lasagna, broiled to bronzed crispiness but still molten on the inside, resting in a pool of fontina fonduta. Start your meal with the skewer of grilled octopus and mortadella—a study of soft-chewy textures—over shell beans and spinach scented hauntingly with Marsala. 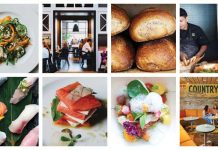