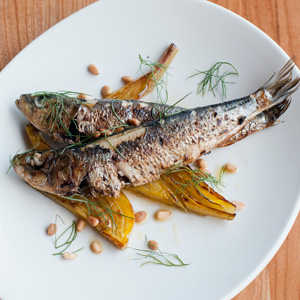 For his first new restaurant in six years, Kevin Rathbun returns to Buckhead, where he started his Atlanta career as executive chef of Nava in 1994. KR SteakBar sits on a leafy bend on Peachtree Hills Avenue amid the ADAC West showrooms. When it opened in February, the glitterati instantly scrambled for tables, set in a Johnson
Studio–designed room of white-oak floors, backlit fiberglass paneling, and a ceiling painted a warm hue somewhere between terra-cotta and Campari. Rathbun and chef de cuisine Chris McDade craft an ever-evolving menu of Italian-inspired small plates: It divides into meat, vegetable, and pasta categories, as well as quinto quarto, a Roman term that includes offal (though with dishes like chicken livers and lamb sausage, the kitchen makes only approachable forays into that territory). Homemade pastas, uneven in the first months, now particularly impress. Rye spaghetti tossed in celery root and pesto has an appealing al dente bite, and a milky pork ragu flatters the simple, satiny texture of maltagliati (roughly cut rectangles). For a table of three or four, skip the smaller steak options and share the funky, glorious dry-aged porterhouse for two, worth the $77 investment.