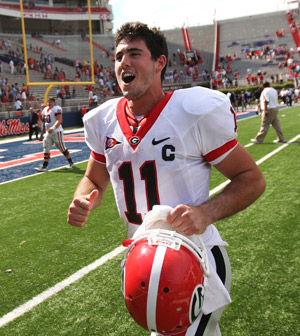 Pick a number between 1837 and 2012, and you’ll probably select a disappointing year for local sports. But 2013 saw a century and a half of mediocrity compressed into seven days that will live in infamy as the Worst Week in Georgia Sports History.

It began Monday, October 7. Despite their two highest-paid players, Dan Uggla and B.J. Upton, hitting below the Mendoza Line and combining for more than 320 strikeouts, the Braves won the NL East. But on this night, another choke left their best closer, Craig Kimbrel, watching helpless from the bullpen as the season ended in a late-inning collapse to the Dodgers.

Meanwhile, at the Georgia Dome, where the Falcons had finished 2012 just ten yards—ten yards!—from the Super Bowl, the Dirty Birds trounced all expectations for 2013 with a gut-punching last-minute loss to the Jets on Monday Night Football, capping a hapless 1–4 start.

Three days later, the Arena at Gwinnett Center hosted Game Three of the WNBA Finals, a nine-point win for the Minnesota Lynx, who swept our Dream for the second time in three years.

The final dagger landed on Saturday, October 12. National hopes for the Bulldogs were all but ended when injury-plagued Georgia was taken to task by upstart Mizzou. (A week later, a loss at Vandy officially ended them.)

Thankfully, that Sunday, October 13, the Falcons ouldn’t lose—they had a bye.

UPDATE: For once the Braves came through late in the game. In November, just as the calendar was running out on the worst sports year in Georgia history, the team snuck in the announcement that it was abandoning the city altogether for the strip malls of suburbia. New Years can’t get here soon enough.

But there were some bright spots . . .

The Rookie Surprise
Burnt out on baseball in college, Evan Gattis took turns as a parking valet, pizza tosser, ski-lift operator, and janitor before returning to the game and becoming the unlikely replacement to injured Braves backstop (and soon-to-be Yankee) Brian McCann. The twenty-seven-year-old rookie went on to slam twenty-one homers and sixty-five RBIs in a utility role.

The Local Champs
Atlanta did finally win a title this year—in minor league soccer. In July, the Atlanta Silverbacks bested the rest of the North American Soccer League to take the spring championship.

The Star Student
Despite his team crumbling to injuries, Dawgs quarterback Aaron Murray: Our Athlete of the Year made the best of a decision to bypass the NFL draft for a final year at UGA by becoming the all-time SEC leader in passing (breaking records set by Georgia’s David Greene and some guy named Peyton) and total offense (hurdling Tim Tebow). He also took graduate-level classes and has conducted research through CURO, a program run by UGA’s honors college.

UPDATE: The sports gods just couldn’t let us have anything. Just as we were celebrating UGA QB Aaron Murray as one of the few bright spots of 2013, the senior suffers a season-snuffing ACL injury. Not the way we wanted to see the all-time SEC great leave Sanford.

This article originally appeared in our December 2013 issue. Updates reflect developments that occurred after press time.